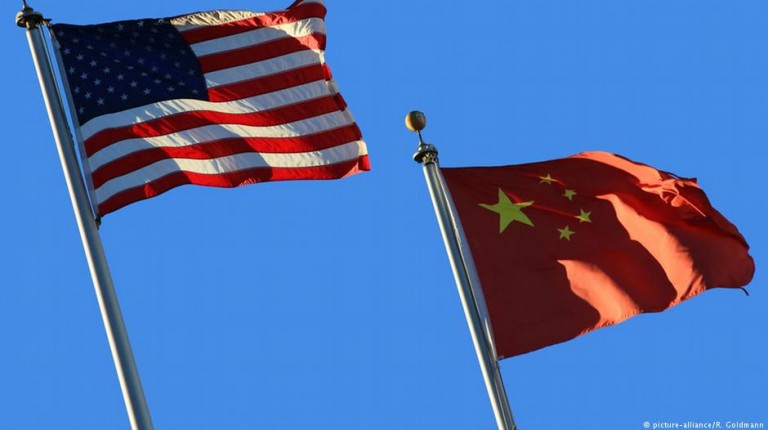 The leaders of the world’s two biggest economies, Donald Trump und Xi Jinping, are scheduled to meet at the US president’s private resort in Florida. They have different views on free trade and many other topics.US President Donald Trump loves to portray his country as a victim of free trade. That’s because the United States buys many goods from all over the world, but sells far less in exchange. The US has done this year after year for decades – in fact, for 41 years in a row, and counting. It has gone ever deeper into debt to the rest of the world, running a trade deficit to the tune of $750 billion (704 billion euros) in 2016 alone.

Those numbers played an important role in the US presidential campaign. Many Americans believe the US trade deficit in goods is linked to a long-term decline in US industries, in which factories have moved abroad – especially to Mexico and China – and millions of American jobs lost. Trump was elected on a promise to turn that situation around.

This is why the US president has been talking about the need to do something to reduce his country’s particularly large trade deficit with certain countries, notably Germany, Japan, and above all China, which recorded a $347 billion surplus in its trade with the US in 2015.

For China, the money earned from exports to the US represents jobs and income for Chinese workers. It cannot easily be replaced, especially now that China’s domestic economy is no longer growing as fast as in previous years. In a tweet prior to his meeting with President Xi, Trump said he expected the talks would be “difficult.” His trade minister, Commerce Secretary Wilbur Ross, a billionaire investor who will turn 80 later this year, chose more drastic language, saying in a Bloomberg TV interview: “We’re in a trade war. We’ve been in a trade war for decades. That’s why we have the deficit.”

China’s low wages and benefits, coupled to its government’s infrastructure investments, easy credit policies, lax environmental rules and pro-business regulatory framework, have made it the workbench of the world. The country produces nearly every kind of consumer goods people in the US tend to buy, from T-shirts to televisions. US corporations have intensified and accelerated the conversion of China into the global manufacturing centre by setting up factories in China.

Is isolation the solution?

Trump could try to reduce the trade deficit by putting import tariffs or other barriers in place, so that Chinese products become more expensive on US markets – in hopes that US corporations decide to produce more goods at home. President Xi is clearly concerned about this possibility – in a speech at the Wold Economic Forum in Davos in January, he spoke strongly in favor of free trade.

Holger Görg, an economist at the Kiel Institute for the World Economy, told DW he thought the US would get more protectionist, “especially in regards to trade with China, and maybe also Europe.”

But some of Trump’s criticisms of China are off the mark – in particular, his claim that China is a “currency manipulator” that keeps its exchange rate with the dollar artificially low in order to promote exports, thereby giving Chinese manufacturers and unfair advantage over US-based manufacturers.

“Not many economists would agree with the claim that China has massively manipulated its currency,” Görg said. Recently, China’s central bank has even intervened to prevent the Chinese currency, the Renminbi, from going lower. In the past three years, the Renminbi has steadily appreciated in value as measured against the dollar. Görg’s view is that the exchange rate is not the key factor favoring Chinese producers – much more important factors are China’s low wages and costs.

Another accusation Trump’s team makes against China is that some of the country’s industries engage in “price dumping.” The World Trade Organization (WTO) has rules against dumping, and if it can be shown that Chinese industries are engaging in the process, the US would be allowed to levy punitive tariffs. 15 years after China’s entry into the WTO, the US still does not recognize China as a market economy, which gives Washington substantial discretion as to the size of anti-dumping tariffs it could impose.

Even without proving dumping practices and levying punitive tariffs, the US could substantially increase its import duties on Chinese products, according to Erdal Yalcin at Munich’s IFO Center for International Economics. That’s because some of the current duties levied are well below the maximum levels permitted under WTO rules.

“Unfortunately, this means that trade could suddenly be burdened with costs that previously didn’t exist,” Yalcin told DW, “even without breaking WTO rules.”

Depending on which industry is at issue, this could result in tariffs ranging from three to 15 percent, Yalcin said. That may be high enough to serve as a useful threat from Trump’s point-of-view, as he sets out to negotiate some kind of new trade arrangement with China. But it wouldn’t be high enough to fully offset the cost advantages of Chinese producers compared to domestic American manufacturers. The latter would only be possible through imposition of tariffs set far higher than the maximum allowed under WTO rules.

IFO economist Yalcin thinks that Trump’s WTO bashing is merely rhetoric. The US has always tended to respect the principle that existing contracts must be respected, and “if that principle is broken, then we’d be in a rules-free trade arena,” he said. “I’m convinced that American institutions won’t allow that situation to occur.”

An escalating trade dispute with China would be unwise for another reason, some analysts say. China is among the US’s major creditors. The net result of many consecutive years of trade deficits with China is that the Chinese central bank owns more than a trillion dollars’ worth of US Treasury bonds. In essence, the Chinese government has an account at the US Federal Reserve Bank of New York with savings of a trillion dollars.

China leaves its money invested in US Treasury bonds because it needs someplace safe to park the country’s collective savings, gained through running trade deficits. In principle, they could sell the bonds and go invest the money somewhere else, and they could stop buying more Treasury bonds in future. By reducing global demand for Treasury bonds, this could cause US interest rates to rise somewhat.

However, that doesn’t give China very much leverage, since the Fed – the US central bank – has tools for bringing interest rates back down if it chooses. IFO economist Erdal Yalcin notes that China has an interest in finding safe and profitable places to invest its dollar-denominated savings. He thinks this could provide opportunities for a deal between Trump and Xi.

Trump could offer Xi opportunities to invest money more profitably in the US, either by means of better terms on US government financial securities or greater access to real-economy investment opportunities, such as takeovers of US firms, in exchange for greater US access to Chinese markets – especially in financial services and IT.

If US banks, insurance firms, management consultancies, and IT firms were given more access to Chinese markets, the trade deficit could shrink dramatically, because these are areas in which US-based firms have a competitive advantage. One out of three export dollars earned by US firms is gained through such highly profitable services.

But the Chinese have long maintained protectionist policies to shelter their own financial services industry. They impose limits on foreign firms’ investments in the country – and in some cases, outright prohibitions. Perhaps they worry that allowing US bankers free access to their country might result in a gradual – or even quite rapid – financial takeover of the Chinese economy by Wall Street interests.

It’s for such reasons that Yalcin believes that regardless of tough talk from Trump and his team, the meeting between Trump and Xi will stay sober and sudden, dramatic policy shifts are not to be expected. “For both sides, there are very concrete win-win strategies,” Yalcin told DW. “They’re more important at the negotiating table than rhetorical flourishes.”