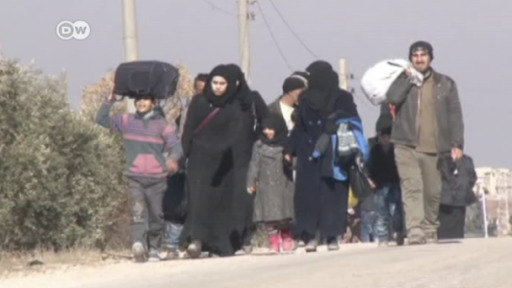 The United States, Britain and France proposed a draft resolution pinning the blame on Damascus for Tuesday’s suspected chemical attack on the rebel-held town of Khan Sheikhoun. More than 70 people were killed and hundreds were hospitalized for respiratory difficulties.

Wednesday’s talks ended without a vote after Russia rejected the proposed resolution, calling it “categorically unacceptable.”

American officials adopted a markedly tougher tone with Russia on Wednesday. US Ambassador to the United Nations Nikki Haley held up photographs of lifeless victims, including children, and accused Russia and Iran of having “no interest in peace” by continuing to support Syrian President Bashar al-Assad. She went on to describe Assad as “a man with no conscience.”

Haley also warned that the Assad regime risked facing unilateral American action over attacks. “When the United Nations consistently fails in its duty to act collectively, there are times in the life of states that we are compelled to take our own action,” she said.

Those remarks paired well with US President Donald Trump’s later assertion that Tuesday’s gas attack had “crossed a lot of lines.”

Addressing reporters during a joint White House press conference alongside Jordan’s King Abdullah II on Wednesday, Trump described the chemical attack on Khan Sheikhoun as an “affront to humanity.”

“I will tell you, it’s already happened, that my attitude towards Syria and Assad has changed very much,” Trump said. “You’re now talking about a whole different level.”

Trump’s harsh condemnation of Assad marked a shift in his administration’s stance on Syria. The Republican had suggested last week that removing Assad from power might no longer be the top US priority.

US Secretary of State Rex Tillerson also appeared to have changed is view on Syria having earlier said that Assad’s fate would be “decided by the Syrian people,” on Wednesday he said there was “no doubt in our mind” that the Syrian government under al-Assad’s leadership was responsible for the “horrific attack.”

US Vice President Mike Pence said in a television interview “all options are on the table” for a US response to the attack. Pence added that Russia must fulfill its obligation under a 2013 agreement to eliminate chemical weapons from Syria.

“We’re talking about war crimes,” French UN Ambassador Francois Delattre told reporters on the sidelines of Wednesday’s UN Security Council talks. “We urge Russia to exert much stronger pressure on the regime … Frankly, we also need an America that is seriously committed to a solution in Syria and that puts all its weight behind it.”

The Britain-based Syrian Observatory for Human Rights found the attack killed 86 people including 30 children and 20 women.

US intelligence officials, the World Health Organization, and Doctors Without Borders said initial evidence pointed to the use of nerve gas in the attack.

Russian Deputy Ambassador Vladimir Safronkov told the UN council that neither Moscow nor Damascus bore any responsibility for the attack, adding that video footage of the alleged attacks was “fabricated.”

Although Russia’s UN envoy said he did not see the need for a resolution, he did call for “thorough, depoliticized investigation based on reliable and verifiable facts.”

“I am sorry I drowned”, Doctors Without Borders’ short film raises awareness on refugees human crisis