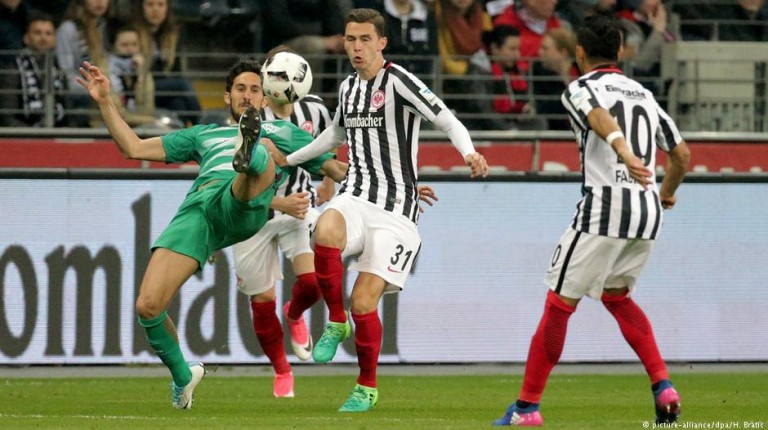 A stirring second half comeback from Frankfurt denied Werder Bremen a seventh win in eight matches and kept the Eagles above their opponents. Marco Fabian’s penalty sealed the point for Frankfurt in a 2-2 draw.Eintracht Frankfurt 2 – 2 Werder Bremen

Despite the pre-match disparity in form, it was the hosts who started the brighter, David Abraham rattling the bar from distance after 10 minutes before Branimir Hrgota just failed to get on the end of a low cross from the left.

Frankfurt were playing with a confidence that belied their form and should have taken the lead just before the half hour mark. First Mijat Gacinovic hit a shot from near the penalty spot too close to Hradecky before Johannes Eggestein was again foiled by the Finnish keeper.

Niko Kovac talked about how his side’s wastefulness in front of goal was liable to be punished by decent sides earlier in the week and the Frankfurt coach must’ve wondered whether his players were listening, as they got hit by a pair of sucker punches just before the break.

First, Junuzovic lashed home from close range after substitute Florian Kainz jinked in to space on the left before delivering a pacy low cross. Frankfurt looked to still be deep in the inquest about how the Bremen skipper was allowed so much space eight yards from goal when Max Kruse latched on to a high ball and nodded to Bartels, who controlled with his thigh before dinking a lovely volley over Hradecky.

No doubt Kovac would have had much more to say at the break and this time he got the response he was after. Just three minutes into the second period his men halved the deficit when Gacinovic diverted Abraham’s wayward header in with his thigh.

The goal galvanized Frankfurt still further, as the Eagles controlled possession. But they created little of note until Niklas Moisander brainlessly hauled back Hrgota in the box. Marco Fabian dispatched the spot kick to bring the sides level.

The momentum was all Frankfurt’s and the men in black and white had a string of chances in the closing minutes, most notably when substitute Haris Seferovic could only hit the side netting after Felix Wiedwald spilt a tame Fabian effort.

There was still time for Kruse to almost steal all three points but his goalbound effort was blocked and both sides had to settle for a point.