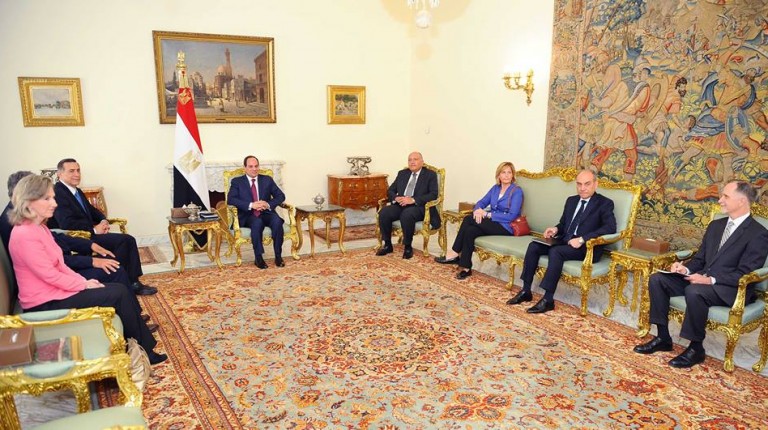 President Abdel Fattah Al-Sisi met on Saturday with a delegation of US congressmen, headed by Darrell Issa, in which he reviewed the outcomes of his meeting with US congresspeople during his recent visit to Washington.

Al-Sisi started his discussion praising the results of his visit to Washington, asserting that it marked an important step in the development of strategic relations between Egypt and the US.

On their side, US congress members expressed their gratitude to Al-Sisi and praised his efforts made in the restoration of security and stability in Egypt, as well as efforts to counter terrorism and extremist thoughts.

During the meeting, he reviewed the developments in the economic situation in Egypt referring to the economic and financial measures adopted by Egypt in the framework of the reform programme and reviewed the projects being implemented in various fields aiming at achieving a comprehensive development renaissance in Egypt.

The meeting also witnessed reviews of Egyptian efforts to face terrorism and eliminate extremist elements. In addition to that, they also reviewed regional issues and possible solutions.

The meeting took place in the attendance of Egyptian Foreign Affairs Minister Sameh Shoukry and ambassador of the United States to Egypt Stephen Beecroft.

During his five-day visit to Washington last week, the president attended a number of meetings with members of the US congress, in which they discussed ways to develop coordination and cooperation between the two countries on issues of common concern in order to deal with the unprecedented challenges facing the Middle East.

Al-Sisi headed to Washington last week on an official visit to meet US president Donald Trump, in which they attended bilateral meetings for many hours, which included agreements on several issues related to their relations and regional conditions as well.

Issa, the head of the US congress delegation also met with Defence Minister Sedki Sobhi and exchanged views on the developments in the regional and international arenas, the current challenges in the Middle East, and the ways to enhance the prospects for joint cooperation.