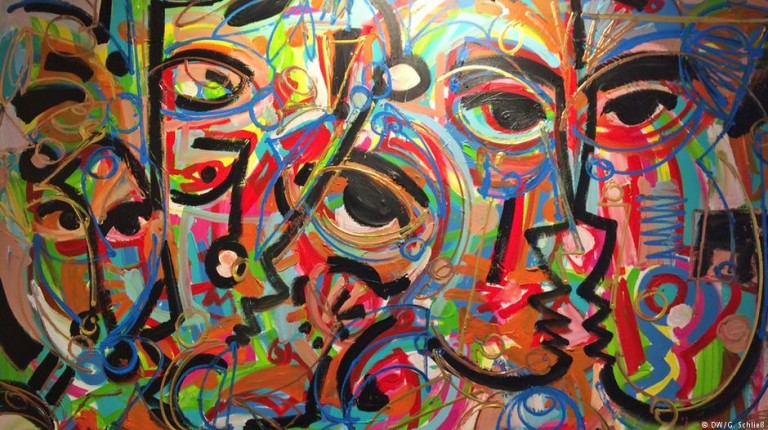 Is Leon Löwentraut the new Picasso, or just a lifestyle product? Experts in Berlin are undecided, yet the media and collectors are crazy about him. Berlin adores such types, says DW columnist Gero Schliess. And why not?The red carpet in front of the art box gallery in central Berlin is not as long as it would have been in Hollywood. Reinhardtstrasse isn’t Sunset Boulevard, either.

All the same, there’s a mood of anticipation among the small crowd and cameras teams waiting in front of the art gallery near Friedrichstadtpalast when Leon Löwentraut finally turns the corner. German good looks, a shock of blond hair, wearing a dark Al Capone-style pinstripe suit, affecting cool – all in all, he comes across as a likeable guy.

Until recently, I’d never heard of the man.

A colleague from a celebrity magazine told me about the event at the gallery just hours in advance, and strongly advised me to go. So I googled Leon Löwentraut: Aged 19, he is the up and coming name of the art scene, dubbed “Bubicasso” (Bubi is German for “little boy”) by German tabloid “Bild Zeitung.”

On my way to the gallery, I read about sold-out exhibitions in London and Singapore. Sold out? That something that usually applies to a product disappearing from supermarket shelves, not to the elitist art industry. My curiosity was piqued.

There are no screaming teenagers in sight as Leon approaches, the crowd stares in awe at the young star, who has his parents in tow – an ordinary, down to earth-looking couple.

The paintings on the walls of the gallery are not as earthy. A bit like Picasso, I think to myself, but much more colorful: large scale, well-composed paintings, mainly in shades of yellow and red. Expressive-abstract is how Leon describes his style. He tells me he has no role models. The art just flows, sometimes at night and while listening to classical music – and I imagine him letting the paint brush gallop across the canvas to the tune of Wagner’s “Ride of the Valkyries.”

But does that make it great art? Opinions vary greatly. The couple next to me has just shelled out 30,000 euros ($31,900) for a painting. They just like Löwentraut, they sheepishly admit. They are not the only ones to buy the young man’s paintings that night – one artwork is even sold twice.

Another art-loving friend provides his own incisive opinion: Leon’s paintings remind him of the artwork hung in hotel hallways, he whispers to me, draining his glass of prosecco.

That is so typical of Berlin, vitriolic cordiality in response to a fun event like this opening reception.

That same night across town, the Robert Eberhardt Gallery celebrated a new show of paintings by one-time celebrity Princess Gloria von Thurn and Taxis. I read about the event the next day in the newspaper: the young gallery owner called the aristocrat’s depictions of fashion designer Wolfgang Joop, Pope Emeritus Benedict XVI and the head of the German Left Party, Sahra Wagenknecht, a “register of the happy few” – and compared them to a stamp collector’s album.

I had to wonder: What did the gallery owner mean by that?

And, truth be told, is Princess Gloria’s stamp collection something everyone needs to see? Or for that matter the Valkyrie-inspired brushstrokes of a young self-taught artist?

No and yes! Of course life would go on without them. But Berlin is always good for a night on the town. And hope dies last.

Here’s a sociological approach: People once went to salons to meet like-minded people. In Berlin today, you go to galleries or techno clubs.

To be honest, there is something else that made me go to the Leon Löwentraut opening that night: a discoverer’s ambition – or the vague hope that one day, I will cross paths with the creator of the next Mona Lisa.

Traveling down Picasso’s path to Guernica