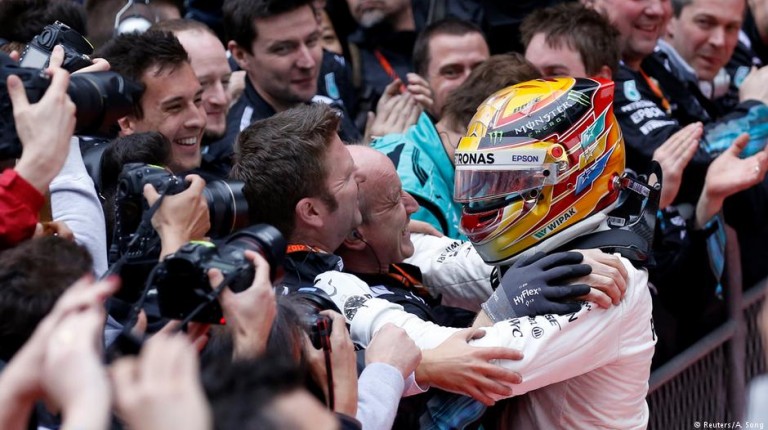 Lewis Hamilton led from the front to claim his first win of 2017 season. The British driver stayed clear of the chaos that marked the start of the Chinese Grand Prix to comfortably hold off Germany’s Sebastian Vettel.Afer Vettel edged out Hamilton in the first race in Australia, the 32-year-old Mercedes driver was determined to get his own back and victory was rarely in doubt after he started strongly.

On a wet track in Shanghai, Lance Stroll was the first to come unstuck, the Candian driver sending his Williams spinning in to the gravel early on. It was a sign of things to come, with five retirements by the end of the race.

But there were no such problems for Hamilton, who pulled away from pole position to establish an early lead that he never looked like relinquishing. Ferrari’s Vettel didn’t enjoy such a smooth beginning and almost lost his 2nd place on the first bend when Red Bull’s Daniel Ricciardo made a move.

Vettel soon dropped to fifth as Ricciardo’s teammate Max Verstappen flew through the pack to move up to second by the half way stage. But the German driver made a move soon after and passed the two Red Bull drivers as he looked to challenge Hamilton.

But the three-time world champion maintained a lead of at least six seconds, even while Vettel pulled further and further away from the rest of the field. As he crossed the line, his team’s message came loud and clear over the microphone: “That was a great race. A masterclass.”

But despite driving a near-flawless race, Hamilton said it was trickier than it looked: “Today was very tough for us all,” he said. “It was mostly dry at the start but a couple of wet corners. I’m so proud of everyone.”

He’s also expecting the championship to be closely fought. “I think it’s going to be the closest championship race I’ve been involved in,” he added. “Ferrari have done a great job and so have we”

For his part, Vettel wasn’t too disheartened by his 2nd place. “I had a very exciting race,” he said. “I tried to chase Lewis down but he was able to respond.”

The Red Bulls finished the race in 3rd (Verstappen) and 4th (Ricciardo) after a nip and tuck ending to the race for the pair with Raikonnen (Ferrari, 5th) and Bottas (Mercedes 6th) rounding out the top 6.