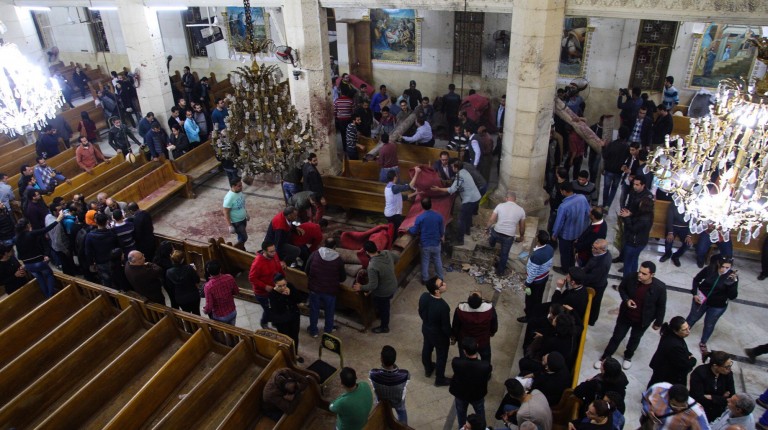 A long night of funerals took place at Mar Girgis Church in Tanta, as more than 27 victims of the terrorist attack which left at least 70 others injured on Palm Sunday were mourned.

A second attack on St. Mark’s Coptic Orthodox Cathedral in Alexandria, where Pope Tawadros II was giving a sermon, saw the police preventing the entry of a suicide bomber who eventually detonated himself right outside the church. At least 16 were killed and more than 40 injured, including seven police officers securing the church’s entrance.

“We bid farewell to our martyrs, welcomed by Jesus on a holy day. The pain of separation overwhelms us, but Jesus’ arms console us,” Pope Tawadros II stated on Sunday.

Initial reports suggested that the two attacks were conducted by suicide bombers. Videos captured by the security cameras of the cathedral in Alexandria showed a man detonating himself as policemen stopped him from crossing through the electronic gate.

The attacks have raised concerns regarding the performance of the security forces, namely the Ministry of Interior, as these were not the first attacks on churches during holy celebrations.

Minister of Interior Magdy Abdel Ghaffar indeed replaced the Gharbeya security chief. In these attacks, like the previous ones, security experts argued that securing churches by the police is usually done from outside the churches and that church affiliated security personnel are in charge of searching people, in order to avoid any sensitive reactions.

“Security personnel of the church are usually familiar with members of the Coptic community regularly visiting the church; if they know me they will be embarrassed to ask me for identity documents,” explained Emad Soliman, an eye witness to the attack in Tanta, who said he was right outside the church when the explosion occurred.

On Monday, Soliman said to Daily News Egypt that he was frustrated and partly blamed security measures at churches. “We know that there is not enough care with security measures, that most electronic gates don’t work, and that some are not seriously performing their duties. Nobody is helping the president or working for the sake of this country,” he said.

While accusing the police of severe negligence in the Tanta attack, Soliman also accused the press and media of incitement to violence and exploitation of people’s pains.

Soliman was not the only one in Tanta taking an aggressive tone against the press and media, but also according to journalists on the ground Sunday, most people inside and near the church were clearly sending a message to reporters that they were not “welcome” there.

Daily News Egypt’s photojournalist on the ground said she could hardly get inside the church. She reported that journalists were assaulted by civilians, and security forces did not interfere.

Moreover, journalist Solafa Magdy told Daily News Egypt on Monday that she has “never witnessed such hostility from victims and their families” in Egypt, who were highly irritated on Sunday.

“They put the blame of the attack on reporters or even claimed that we were happy about their misfortune,” said Magdy, who was at the scene shortly after the explosion. She said that she was only able to work according to temporary permissions by the people, or sneak a few shots while no one paid attention. Magdy also asserted security did not interfere to stop assaults on journalists.

Asked about the possible reasons, Magdy said she believes the press and media have a responsibility towards people’s lack of trust in them, because several outlets have been controlled by the state and failed to represent Copts and other minorities; on the contrary making use of such important incidents to beautify the image of the ruling regime.

In his speech after the attacks, Al-Sisi also blamed the media, saying that the scenes and images of the attacks were repeatedly broadcast in the media without taking into consideration people’s feelings. “It was enough to report it once,” Al-Sisi said.

Also regarding the media, Al-Sisi said that there should be new regulations enforced by the upcoming National Council he formed to combat terrorism, among urgent measures he undertook with members of the National Defence Council, along with a state of emergency.