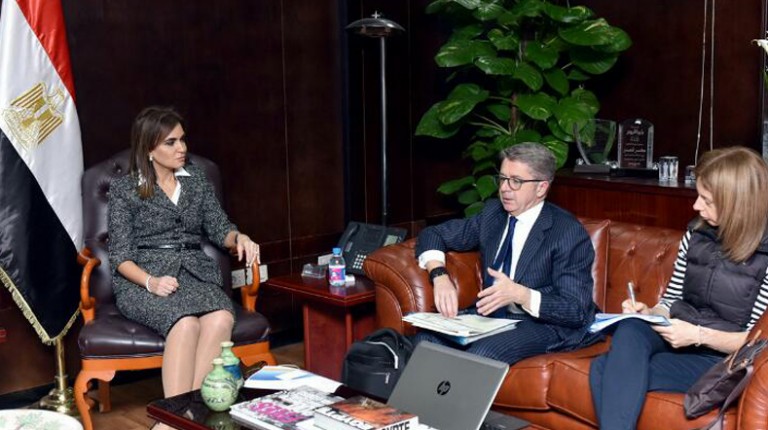 Minister of Investment and International Cooperation Sahar Nasr held a meeting with Minister of Transportation Hesham Arafat and the president and CEO of General Electric Egypt (GE), Ayman Khattab, on Monday, to negotiate about GE’s offer to develop Egypt’s railways.

The ministry explained in a press statement that GE’s offer includes providing Egypt with 100 to 200 train wagons, 35% of which would be manufactured in Egypt in the framework of the company’s vision to increase its investments in Egypt and create more jobs.

However, the sides also held talks about the results of Egyptian President Abdel Fattah Al-Sisi’s visit to the US. Nasr stated that the offer of the American company must be in line with the best international standards that are suitable for the needs of the Egyptian people. She stated that GE’s willingness to manufacture 35% of the wagons locally would help with the transfer of technology into Egypt and also provide job opportunities for Egyptians.

Moreover, Khattab pointed at the important role that GE plays in the system of Egypt’s railways, especially at transporting goods, which reduces the cost of transportation and traffic on Egyptian roads. He added that GE wants to expand its investments in the fields of renewable energy, including both solar and wind energy.

From another direction, Nasr held a meeting with the CEO of Italian firm Italgen, Giuseppe De Beni, who is currently visiting Egypt, to discuss establishing a wind energy plant to generate 320MW in Zaafarana, with investments worth $350m. De Beni stated that Italgen wants to increase the company’s investments in Egypt in the sector of renewable energy.

Furthermore, the minister has visited on Sunday the one-stop shops for investments services. She said that the government is working to improve the economic environment in order to attract new investments, adding that the near future will see easier access for investors to the Egyptian market.