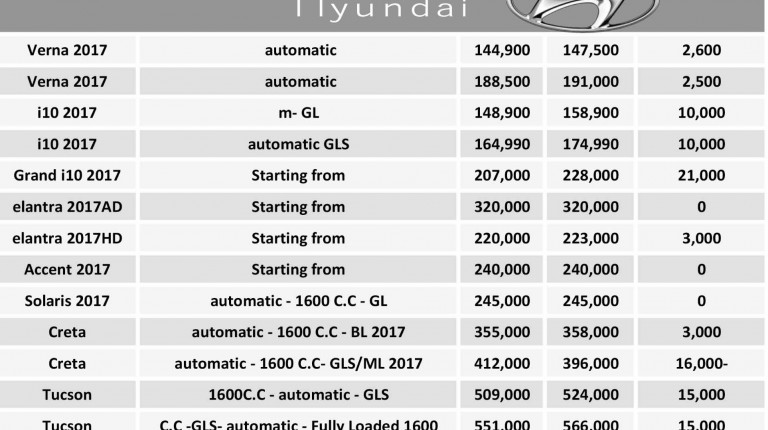 Hyundai decided to raise its prices again, following a period of discounts that lasted throughout last month and the first week of April. The carmaker suffered a sales drop in February, marking only 159 units compared to 3,439 units sold in February 2016.

Car dealerships and distributors have started offering discounts as their sales have dropped.

The decline in sales rates reached 60% in February 2017 compared to the same month in 2016. The market saw sales of only 6,530 units, compared to 16,527 units, according to the Automotive Marketing Information Council (AMIC).

Among the most prominent carmakers offering discounts is GB Auto, which offered lower prices of its Geely and Chery models. Nissan, Mitsubishi, and Chevrolet are also offering lower prices.

The beginning of April also saw some Toyota models with lower prices. On the other hand, Renault and Opel kept their prices unchanged from last month.

German car manufacturer Mercedes raised the prices of most its models in Egypt. In early 2017, the market saw a wave of price increases that impacted over 130 models across all brands in Egypt, boosting the prices to their record high amid expectations of further increases. Yet, the sales recession pushed dealerships and distributors to lower the prices in March in a bid to achieve sales.