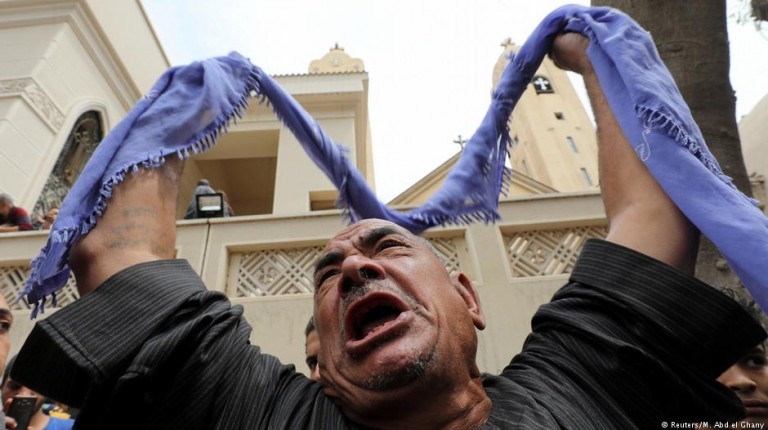 As Egyptians impatiently wait for authorities to identify the perpetrators of Palm Sunday’s terror attacks on churches, state-owned media reports pointed to security sources’ suggestions of the involvement of local militant groups.

The groups are called Lewaa Al-Thawra and Hasm, and have previously carried attacks against security forces. In 2016, Lewaa Al-Thawra claimed responsibility for the assassination of major Adel Ragaai, the head of the army’s ninth armour division. The group also claimed responsibility for killing two police officers and injuring three others in an attack on their checkpoint in Menoufeya.

Recently, the group claimed responsibility for a bombing near a security-forces training camp in Tanta, in which one policeman was killed and 12 others injured, in addition to two civilians.

Hasm has also claimed responsibility for an assassination attempt on assistant prosecutor general Zakareya Abdel Aziz in October 2016, as well as a bombing in Giza, which claimed the lives of six police personnel and injured another three.

State-owned media Al-Akhbar cited unnamed security sources linking the attacks to a Saturday police raid on two members of Hasm and Lewaa Al-Thawra in Beheira which resulted in their killing. The police had stated back then that a raid targeted the farm where the two resided, followed by an exchange of fire during which they were killed. The forces found large amounts of explosives and chemicals used to create TNT.

The report added that the militant groups received support from friends in Qatar and Turkey, an assumption they said was based on a number of statements made by Muslim Brotherhood members in those countries, inciting violence and encouraging several attacks.

However, it is noteworthy that Hasm, in official statements, has distanced itself from attacks on churches and that their primary targets so far have been security forces rather than specifically civilians.

State-owned Al-Ahram reported Monday that authorities were close to identifying the Alexandria suicide bomber. The Ministry of Interior published a video of Alexandria’s security chief inspecting the entrance of St. Mark’s Cathedral shortly before the attack. He was seen directing the police officers—who were killed in the bombing—to move the electronic gate farther away from the entrance.

At least two videos from the cathedral’s security camera showed a man trying to enter the church from a door unguarded by electronic gates. In the footage, he is prevented from entering and directed to the electronic gate. He took one step forward, then another back, and then the explosion occurred.

Meanwhile, Kuwaiti media has claimed that one of the suicide bombers has previously been forwarded by Kuwaiti authorities to Egyptian authorities due to his connections with the Islamic State.

Following the attacks on Mar Girgis Church in Tanta and St. Mark’s Coptic Orthodox Cathedral in Alexandria, in which more than 40 people were killed and over 100 injured, the so-called Islamic State (IS) claimed responsibility.

In a statement circulated online, IS said that two suicide bombers successfully carried out the operations. It identified them as Abu Ishaak El-Masry and Abul Baraa El-Masry, for the two attacks respectively.

Kuwaiti news website Al-Qabas reported Monday that Abul Baraa El-Masry, believed to be the perpetrator of the Alexandria attack, has entered Kuwait in 2016 with a work permit for a trade company for which he worked as an accountant.

He was summoned by state security authorities upon information received by Egyptian security bodies regarding his relationship to the IS. After intense interrogations, authorities decided to hand him over to Egyptian authorities on grounds that “his involvement with IS was proven,” Al-Qabas reported.

The news report quoted unnamed security sources expressing perplexity at the fact that he walked free after being sent back to Egypt.

The same report released additional information on the alleged suicide bombers: Abul Baraa El-Masry, born in 1974 in Kafr El-Sheikh and having travelled to Libya and Lebanon and also Syria in 2013. As for Abu Ishaak El-Masry, he was born in 1990 in Minya, has a bachelor degree in commerce and also entered Syria in 2013 through Turkey.