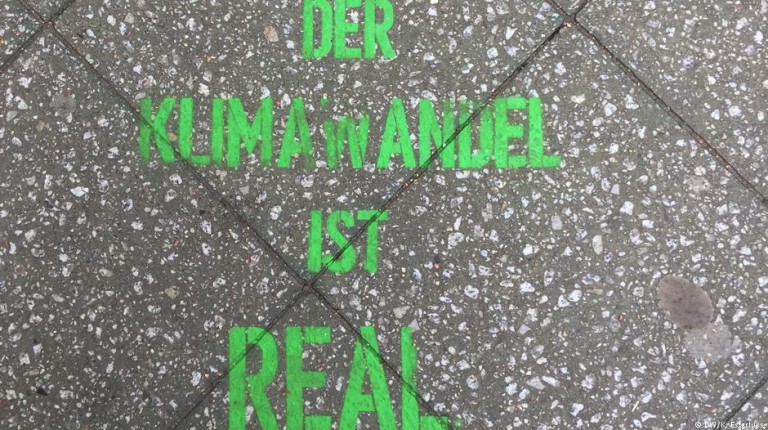 Someone in Berlin is leaving words in green on the sidewalks. And the message is clear: take climate change seriously.I could have made it to work quicker today. But spontaneously, I decided to get out of the tram and walk through the Berlin neighborhood of Prenzlauer Berg in Berlin.

Turns out it was a good decision because it was then that I noticed, by coincidence, that there’s someone else in Berlin who is worried about the climate. Painted in big, letters on the sidewalks of the central district were green messages. Not exactly street art, but certainly eye-catching. Perhaps even something to stick in the minds of those passing? Who knows? Would you have noticed them?

“Climate change is real,” said one message: “Since 1900, the temperature rose by 0.74 degrees Celsius,” stated another – this is, by the way, an impressive figure. Under the Paris Agreement on climate change, which will enter into force in 2020, countries have agreed to do everything possible to limit temperature increase far below 2 degrees Celsius compared to the pre-industrial age. Actually, they decided it should be a rise of a maximum of 1.5 degrees Celsius. From 0.74 to 1.5…that’s only a small gap.

Whoever sprayed the words at least has a clear message.