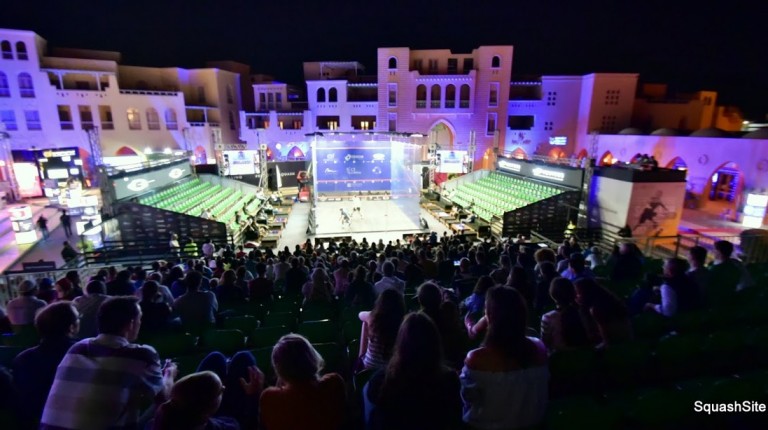 Tourism in Egypt declined for the past few years as a result of security concerns. This year, El Gouna Egypt again hosts El Gouna International Squash Open for men, in addition to hosting the Orascom Development PSA Women’s World Championship, in an effort to help revive tourism.

The tournament, which is being held from 5 to 14 April under the auspices of both the Minister of Youth and Sports and the Egyptian Tourism Authority (ETA), is one of the world’s top seven international squash tournaments. It hosts 56 players from 20 countries, including Egypt, the UK, France, the Netherlands, Malaysia, and many others, who will compete in the tournament for a grand cash prize of $165,000 for women and $150,000 for men.

Amr Mansi, founder and CEO of I-Events, which organises the tournament, told Daily News Egypt that it’s important to send a message of peace to the world and to show that we are able to organise an international sports event. “Hosting one of the biggest squash tournaments of the world in such a spectacular place such as El-Gouna is considered a huge accomplishment for me and my team, which wouldn’t have happened without the support of Samih and Naguib Sawiris, who gave me the opportunity to achieve such a goal,” he stated.

The tournament will be broadcasted on international TV channels, including beIN sports. Audience watching such a sports event taking place at El Gouna will surely believe that it is safe to be here, according to Mansi.

Moreover, the fact that every player is a representative of his or her country and that they will be sharing their experiences here at El Gouna through social media with their audience, which will play an important role in improving Egypt’s image abroad. “I believe that such events can help in restoring tourism and that it will stand against the terrorism attempts,” says Mansi.

He continued to explain that such tournaments come at a very high financial cost. That’s why a diverse set of sponsors were needed. This year, the event was able to secure financing from various sponsoring parties, such as the ministries of youth and tourism, Arab-African International Bank, CI Capital, Orascom Telecom Media and Technology Holding, Gemini Development, Carrier, Ayia Napa Marina, Maserati, Daily News Egypt, Alborsa, and many others.

Samih Sawiris, founder and chairperson of Orascom, stated that Egypt does not lack talent and that events such as this help such talents receive the recognition they deserve, as El Gouna is not only hosting the international squash open for the sixth year, but also the Women’s World Championship, showing determination and perseverance.

On the other hand, Khaled Bichara, CEO of Orascom Development Holding and Orascom Hotels and Development, said that these tournaments are living proof that El Gouna has grown to be more than just a prominent touristic destination, becoming a hub for international events.

The tournaments, which earned a lot of attention and garnered significant support from the private sector, in addition to the government, currently take place in two areas within El Gouna. The first one is the new squash area, where morning games take place; the second one is CI Capital glass court arena, which is the main venue for the tournaments, hosting the games taking place at night and being the only venue for quarterfinals, semi-finals, and finals.

During the first part of the tournament, Egypt has successfully been able to sustain its position as a squash super power. In round one of the men’s’ tournament, which took place on 7 and 8 April, seven Egyptian players advanced to round two, including Mohamed El-Shorbagy, ranked third internationally, his brother Marwan El-Shorbagy, ranked sixth internationally, and Karim Abdel Gawad, ranked second, as well as Mohamed Abouelghar, Mazen Hesham, Fares Dessouky, and Karim Ali Fathi.

However, only four of these seven players were able to qualify for the quarterfinals, which are scheduled to take place on 11 April and 12 April. One of them is Mohamed El-Shorbagy, who will now play against his younger brother Marwan El-Shorbagy for the second time after they faced each other at the Windy City Open quarterfinals, which ended in a triumph for Marwan and his qualification to the semi-finals. The game will take place on 11 April. The other two Egyptians are Karim Abdel Gawad, who will play against Germany’s Simon Rösner, ranked 10th, and Dessouky, who will play against Peru’s Diego Elias, ranked 22nd, while Gregory Gaultier, currently ranked first, will play against Paul Coll, ranked 13th.

After his victory, Abdel Gawad told Daily News Egypt that he is thrilled to have been able to qualify for the quarterfinals at El Gouna for the first time and that he is extremely pleased to be able to achieve that in his own country.

In the Orascom’s PSA Women’s World Championship, three Egyptians have successfully qualified to the quarterfinals, including Nour El-Sherbini, the Egyptian champion and the world’s number one ranked player, who is scheduled to play against Sarah Jane Perry, ranked eighth internationally, on April 11. Furthermore, Nouran Gohar, currently ranked fifth, will play against Nicol David, ranked sixth, and the last Egyptian will be Raneem El Welily, ranked fourth, playing against England’s Laura Massaro, ranked second.

The organisers hope that the tournament is a successful step among the continuous efforts to restore the tourism industry to its previous glory, which at its peak in 2010 was one of the main sources of foreign currency and revenues for the Egyptian economy, providing annual revenues of nearly $12.5bn, account for more than 11% of the GDP and 14.4% of foreign currency reserves, while employing more than 12% of Egypt’s workforce.