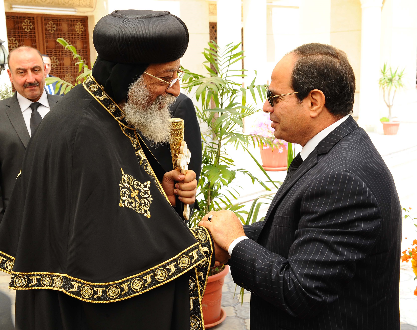 President Abdel Fattah Al-Sisi visited Cairo’s St. Mark’s Orthodox Cathedral in Abbassiya to extend his condolences for the victims of the Palm Sunday attacks on Mar Girgis Church in Tanta and St. Mark’s cathedral in Alexandria.

Al-Sisi met Pope Tawadros II, asserting that “all state apparatuses are exerting utmost efforts to hunt down the perpetrators of the abhorrent acts and to bring them to justice as soon as possible,” a presidential statement read on Thursday.

Al-Sisi underscored his confidence in the Egyptian people’s awareness of the motives of those who support this heinous terrorism as means to sow seeds of division among the Egyptians and to undermine efforts to build, develop, and restore security and stability.

For his part, Pope Tawadros II stated that terrorism will not succeed to divide the Egyptians or undermine their unity and stability.

This comes as the Ministry of Interior revealed Wednesday the identity of the perpetrator in the Alexandria bombing—where Pope Tawadros II was heading a mass. In a statement, the ministry said the suicide bomber is 30-year-old Mahmoud Hassan Mubarak Abdullah, who was born in Suez and works at a petroleum company.

The ministry said he was part of a terrorist cell, which was also behind the December attack on St. Peter and St. Paul Church in a Sunday mass.

The ministry added security forces were still hunting down the second suicide bomber behind the attacks in Tanta, listing at least 19 other terrorist suspects wanted in connection with the attacks.

At least 45 people were killed and over 100 injured in both attacks.