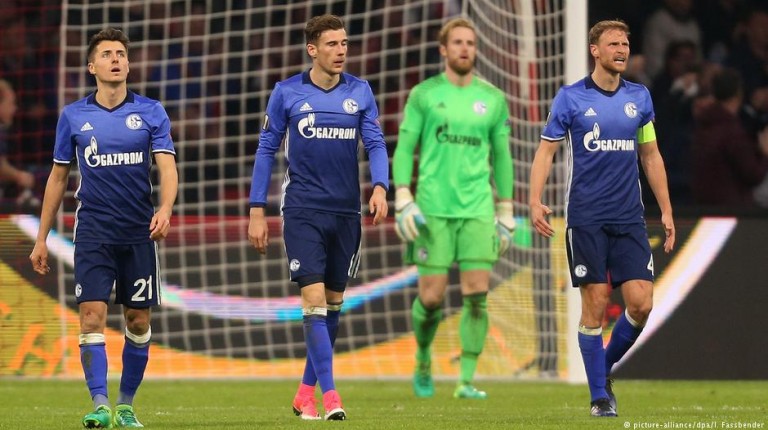 Schalke’s hopes of a successful season dangle by the thinnest of threads after an abject display condemned them to a quarterfinal loss to Ajax. Over in France, crowd trouble marred Lyon’s win over Turkey’s Besiktas.Ajax 2-0 Schalke
(Klaassen 23′ pen., 53′)

This game had been billed as a chance for Markus Weinzierl’s men to follow in the footsteps of the Schalke side dubbed the “Eurofighters”, who won this competition 20 years ago. But the current crop proved just how far they have to go, with a performance that won’t be unfamiliar to those who have caught some of their domestic displays this term. Only goalkeeper Ralf Fährmann saved them from embarrassment.

The Royal Blues came in to Thursday’s game after hammering Wolfsburg in a 4-1 win that showed there is talent in this squad but, after losing key defender Sead Kolasinac moments before the game, they looked all at sea from the outset. In fact, it was the Dutch side who turned back the clock, showing snatches of the fluid football for which previous Ajax sides have been renowned.

The hosts, who had won their previous five Europa League games at the Amsterdam Arena, weaved pretty patterns but initially struggled to really penetrate, until a more direct approach helped break the deadlock.

German winger Amin Younes, who came through the ranks at Borussia Mönchengladbach, picked the ball up on the left before slaloming between two Schalke defenders and in to the box. Alessandro Schöpf put an arm across Younes, who went to ground easily but not entirely without justification and Davy Klaassen slammed home the penalty.

The Bundesliga side were hanging on, Ajax pinning them back and going close through Bertrand Traore and Davinson Sanchez before the half-hour mark. Schalke only registered their first shot of the match in first-half injury time and could count themselves fortunate to only be a goal behind as the sides went in to the break.

They got what they deserved shortly after the restart as Ajax doubled the lead. Some neat passing in midfield set Justin Kluivert – son of Dutch legend Patrick – free down the right. He was given plenty of time and space to look up and pick out a low ball to Klaassen, who – without a blue shirt within five yards of him – lashed home from 12 yards out.

Moments later it was nearly three as a rudderless Schalke gave the ball away yet again under no real pressure. But keeper Fährmann, who wasn’t without a share of fault for the second goal, denied Traore after the Chelsea loanee was sent through on goal. The pattern continued – Schalke were sloppy in possession and Ajax created yet more chances.

As the half wore on, Fährmann had become a one man crusade for Royal Blue respectability pulling off a string of saves to deny various Ajax players. He was briefly joined by the crossbar, which denied Donny van de Beek with ten minutes remaining, as Ajax did everything but seal the tie in the first leg. Fährmann’s heroics give Schalke a chance back in Gelsenkirchen next week, but they’ll need to be so much better than this to have any chance of taking it.

In a tough week for football, Lyon’s 1-1 draw against Besiktas was marred by crowd trouble that saw fans forced to flee on to the pitch for their own safety shortly before the scheduled kick off time.

“Objects and firecrackers which were thrown from the upper parts of the stands forced the supporters to take refuge on the pitch,” said the French club on Twitter.

Lyon president Jean Michel Aulas went into the crowd in an effort to calm supporters before the game eventually kicked off about 45 minutes late. Dutchman Ryan Babel opened the scoring for the Turkish side before Lyon came roaring back to win 2-1 with late goals from Corentin Tolisso and Jeremy Morel.

A Henrikh Mkhitaryan goal wasn’t enough to secure Manchester United an away win against Anderlecht in Belgium after a late Leander Dendoncke strike ensured the spoils were shared at the Constant Vanden Stock Stadium. In the night’s other game, Celta Vigo recovered from conceding an early goal to beat Belgian surprise package Genk 3-2, a result that leaves the tie firmly in the balance ahead of the second legs next week.

Re-live the Ajax v Schalke action as it happened:

Schalke knocked out by Ajax in Europa League thriller