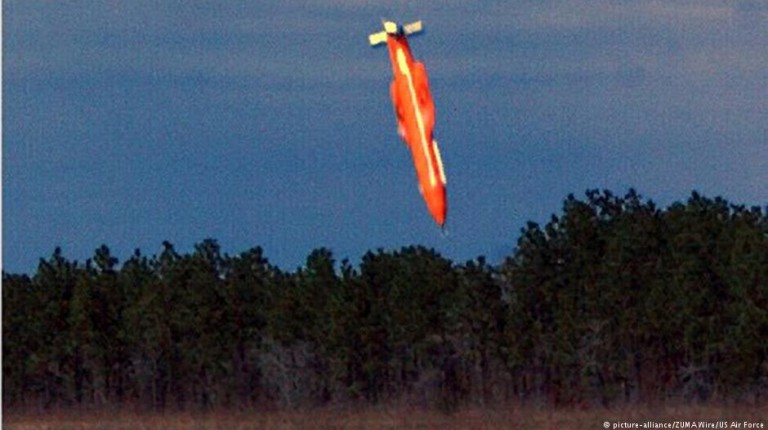 The US has dropped the largest non-nuclear bomb on an “Islamic State” (IS) target in Nangarhar. DW examines the reasons behind the attack, its timing, and whether IS really poses a big threat to the US in Afghanistan.Residents of Achin district, where the US dropped the “Massive Ordinance Air Blast” or MOAB – touted as the “mother of all bombs” – described the explosion as the biggest they had ever seen. And the Afghans have definitively seen a lot of colossal bombings in the past few decades, particularly during the US invasion of their country in 2001 and after the consequent fall of the Taliban’s Islamist regime.

Defense experts say the MOAB is a successor to the BLU-82 “Daisy Cutter,” used during the Vietnam War and the start of the post 9/11 Afghanistan conflict.

“What it (MOAB) does is basically suck out all of the oxygen and lights the air on fire,” said Bill Roggio of the Foundation for Defense of Democracies think tank, to an American journal.

“It’s a way to get into areas where conventional bombs can’t reach.”

But President Donald Trump’s administration’s decision to drop such a huge bomb in the war-ravaged Afghanistan’s eastern Nangarhar province raises a number of questions.

First of all, does the so-called “Islamic State” (IS) pose such a massive threat to US interests in the region that justified the use of the MOAB against the group?

Secondly, what did Washington achieve by killing some 36 IS fighters in Afghanistan through this very expensive explosion?

“I’m familiar with the area and I believe the US military did not need to use such a huge bomb to target a small number of IS fighters,” Attiqullah Amarkhail, a Kabul-based retired military general, told DW.

“When you drop 11 tons of explosives and kill only 36 of your enemies, it is a waste of your weaponry, unless you have some other targets to achieve,” Amarkhail added.

According to US’ own estimates, there are between 600 and 800 IS fighters in Afghanistan, primarily in Nangarhar province. The militant group is much more active and has a much bigger presence in Iraq and Syria. The US has never used the MOAB in these Middle Eastern countries.

But that certainly does not mean IS is not expanding in Nangarhar and other parts of Afghanistan.

Reports of IS presence in Afghanistan emerged in early 2015. In 2014, the Afghan government and US military officials acknowledged that the terror group was recruiting fighters in eastern Afghanistan, using the power vacuum in the Taliban leadership.

“If this group is not stopped here [in Nangarhar province], it will pose a danger not only to Afghanistan but also to other countries in the region,” a resident of Achin district told DW in 2015, calling on the Afghan government to support their fight against the terror group.

The scene in Achin district in Afghanistan’s eastern province of Nangarhar, which shares a border with Pakistan’s tribal areas, bears resemblance to parts of Syria and Iraq under IS command. Members of the terror group control large parts of the district, killing opponents, looting houses and spreading fear among residents with the help of their recently-launched propaganda tool, “The Caliphate Radio.”

IS members broadcast threats to harshly punish those who oppose Abu Bakr al-Baghdadi, head of the self-declared “caliphate” extending over parts of Iraq and Syria.

“The MOAB was clearly meant to telegraph a message of intent, that the US will come after IS militants wherever they may be, whether in Afghanistan or elsewhere,” Michael Kugelman, Afghanistan expert at the Washington-based Woodrow Wilson Center for Scholars, told DW. “That said, we shouldn’t assume that this bomb will set some type of precedent for assaults on IS elsewhere around the world.”

The American expert admits that the group’s presence in Nangarhar has been weakened in recent months. “The US and Afghanistan have been leading a joint effort to eliminate IS fighters there for quite some time, and in fact just earlier this week they took out a large number of fighters in the very district where the bomb was dropped. My sense is that this bomb was meant to eliminate those fighters that survived the earlier US-Afghan operation and had fled into the tunnels that the bomb targeted,” Kugelman noted.

Experts say the Thursday bombing in Afghanistan could also be a message to Afghanistan’s neighboring country Pakistan, which many policymakers in Washington believe is supporting Afghan militant groups, including the Taliban and IS.

Despite the fact that the “IS” presence in Afghanistan seems quite limited, there is a possibility that the militant group is getting assistance, and possibly fighters, from neighboring Pakistan. In the past few months, IS has claimed a number of deadly attacks on Pakistani soil.

The Islamic country also has a reputation as a breeding ground for Sunni militant groups. Afghan authorities have repeatedly accused Islamabad of supporting the Taliban and other militant groups and sending them into Afghanistan to destabilize the government.

Observers find it interesting that the US chose to use the biggest non-nuclear bomb in its arsenal at a time when Russia is hosting an Afghanistan conference in Moscow.

12 countries, including Afghanistan, China, India, Iran and Pakistan are participating in the Friday conference. The US was invited to take part, but it turned down the invitation.

In December last year, representatives of Pakistan, China and Russia met in Moscow to discuss the Afghan conflict but they excluded Afghan officials from the gathering.

Geostrategic relations are rapidly changing in southern Asia. Former Cold War rivals India and the US are bolstering their defense and trade ties amid growing concerns about China’s assertiveness in the region, particularly in the disputed South China Sea. On the other hand, Islamabad and Washington, who were allies against the former Soviet Union and collaborated in the 1980s Afghan War, are drifting apart. Simultaneously, Islamabad and Moscow are reviving their ties, as the two Cold War-era foes held their first-ever joint military drills last year.

The changing geopolitics has also prompted Pakistan to forge closer ties with its long-time ally China. Beijing is expanding trade and military cooperation with Islamabad in view of the New Delhi-Washington maneuvers.

Experts say the US does not want Russia and China to increase their presence and influence in Afghanistan with the help of Pakistan and Iran. They note that the Nangarhar bombing was a message from the Trump administration to these countries that they should not take Washington’s somewhat minimal role in Afghanistan as its weakness.

“The US is showing its military power to Russia and China. The timing of the use of MOAB is very important to understand the situation. Moscow is hosting a conference on Afghanistan and the US has sent a warning to everyone participating in the meeting,” underlined Afghan expert Amarkhail.

But Amarkhail believes that the Nangarhar bombing would exacerbate the security situation in Afghanistan.

“The militants will use this bombing to recruit more fighters.”