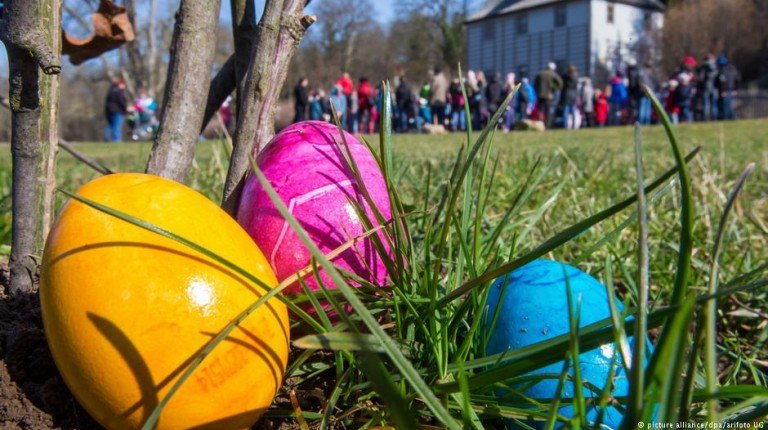 Even if you only buy eggs from free-range or organic chicken farms, chances are you’ve also eaten eggs from caged animals. In light of the Easter holidays, we shed light on the sordid business of eggs.Eggs sold in the European Union must bear a clear label that indicates how they were produced, among other things. Under this scheme, 0 stands for organic eggs, 1 for free range, 2 for barn or deep litter, and 3 for eggs from battery chickens.

Although the EU banned battery cages in 2012, farmers are still allowed to keep hens in so-called enriched cages, where hens can stretch their wings and roost on a platform.

Ever since the EU label legislation came into force in 2004, many people stopped buying eggs from group 3 – what’s now eggs from “enriched” cages. Many supermarkets in Germany don’t even offer them anymore.

They’re still offered in many other EU member states, though. In some countries, people buy mostly group 3 eggs.

You’re eating them, too

But even in Germany, many people still eat those eggs, even though they didn’t buy them raw.

“Processed eggs that are used in cakes or pasta don’t have to be labeled,” said Frank Waskow of the consumer protection agency for North Rhine-Westphalia.

“Eggs of group 3 are still being used for those products – probably for the majority of these products,” he added. “If it’s not stated otherwise on the packaging, you can assume [battery chicken] eggs have been used.”

And here’s the twist: Those colorful, ready-to-eat hard-boiled eggs that can be found in stores all over at Easter time are considered to be processed egg products, too. So they don’t have to specify what kind of egg has been used.

Indeed, it’s safe to assume these are indeed group 3 eggs, says Waskow. “Even though they’ve been cooked and colored, they are still a lot cheaper than normal eggs. That’s a clear indicator that these eggs can’t be barn, free-range, or organic eggs,” he told DW.

He says if you are concerned about animal welfare, it would be best to prepare your Easter eggs at home – with eggs that you’ve bought yourself.

Even organic is ‘animal abuse’

Lisa Wittmann of animal welfare group PETA disagrees. “As a consumer, don’t fool yourself – all forms [of egg production] in their current state are animal abuse. Even organic.”

In theory, hens have more space and comfort on organic farms, and they receive higher-quality feed. But those standards often only exist on paper, says Wittmann – and there’s no adequate monitoring.

In past years, PETA and other organizations have secretly filmed how hens are kept on farms. Many of these recordings show apathetic animals without feathers, dying and dead hens, and stalls drowning in feces – also on organic farms.

While Waskow believes this is the exception rather than the rule, Wittmann is convinced these practices happen across the board.

Both agree that it’s a scandal when farms where abuses have been documented lack any serious consequences – they don’t even have to fear losing their business license, for instance.

Off to the slaughterhouse … after one year

And another fun fact: Don’t be fooled into thinking that a hen brought up on an organic farm can look forward to a long life, says Wittmann. After one to one-and-a-half years, it’s off to the slaughterhouse – because older hens don’t lay that many eggs anymore.

Keep in mind that a red jungle fowl – the type of chicken that was used to breed today’s turbo species – can live up to 10 years.

Often overlooked are the conditions under which hens are being bred. Even though their offspring might be kept in more roomy areas as part of the organic deal, this doesn’t mean the mama chicken get the same treatment, according to Wittmann.

“Since animal protection regulations for laying hens don’t apply here, they can be kept under worse conditions,” she said.

And male chicken are considered trash since they can’t lay eggs – instead, they are killed immediately after they’ve hatched, a brutal practice known as chick shredding.

The organic industry in Germany wants to do away from killing of male chicks, says Waskow, and there have been a few initiatives. However, more needs to be done to make this a broader practice.

For instance, one initiative allows detecting the chick’s gender before it has hatched – so the male chicks don’t even have to be born. Or, to use a breed that can both lay eggs and deliver juicy meat.

But it will be a long time until these solutions will actually be implemented – in the meantime, the egg industry will continue to kill off 330 million male chicks every year.

Food for thought as you crack into your next egg.

In Video: Egyptians celebrate Easter despite all odds

In Pictures: Egyptians celebrate Easter despite all odds