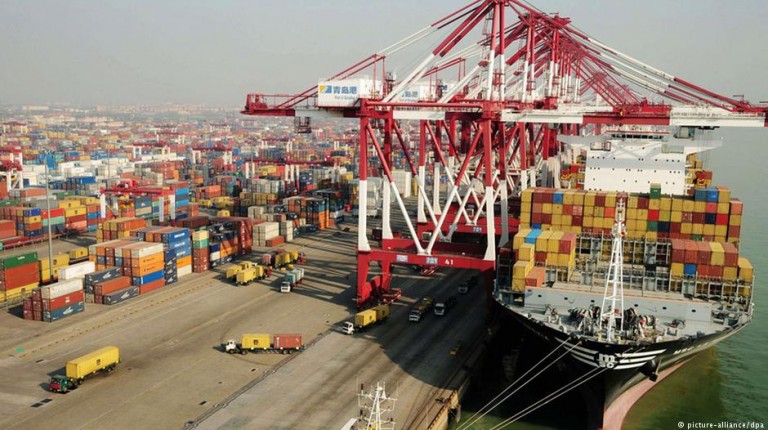 Donald Trump ran for President pledging to narrow US trade deficits. But a strong dollar is working against him – it makes US exports less price-competitive globally, and foreign goods cheaper in the US.Trump acknowledged that the strong dollar would undermine US exports and help foreign exporters sell more goods in the US in a Wall Street Journal interview this week. “I think our dollar is getting too strong and partially that’s my fault because people have confidence in me,” he said. “That will hurt ultimately.”

The 2016 US trade deficit was the largest in four years, totalling $502 billion (472 billion euros) when goods and services are summed.

The US runs a substantial overall trade surplus in services like intellectual property licenses, travel-related services, financial and insurance services – it ran to $248 billion in 2016 – and a very large trade deficit in goods, amounting to $750 billion last year.

Consumer products and automobiles are the main drivers of the trade deficit. The US imported $350 billion worth of automobiles and parts in 2016, while exporting $150 billion. The difference, $200 billion, accounted for nearly 40 percent of the trade deficit. Consumer goods like generic drugs, televisions, clothing and other household items accounted for much of the rest. The US also imported $73 billion more in petroleum products than it exported.

But Trump’s previous pledges to get tough with China on trade may be melting away, in part because he seems to have offered Chinese President Xi a deal in which liberal US trade policy will continue in exchange for Chinese cooperation in resolving security concerns around North Korea.

Does the trade deficit matter?

According to many economists, such as Tim Worstall, a fellow at the Adam Smith Institute in London, the US trade deficit is “a matter of… no importance whatsoever.” Indeed, from a US point-of-view, it may be a good thing.
Running trade deficits year-after-year and accumulating large external debts in US dollars would be a serious problem for most countries, but it is not a problem for the US, economists say, because the US financial system creates the dollar – and the dollar is the global reserve currency as well as the main global trade currency.

Global demand for dollars includes a huge demand for dollar-denominated financial investments such as US Treasury bills, which are seen as arguably the world’s safest investments. Dollar demand is much higher than it would be if dollars were only used to buy US goods and services.

In other words, the trade deficit is in reality a very big free lunch for Americans. Trump’s accusations that foreign countries with large exports to the US are “trade cheats” are puzzling in this perspective.

Reasons for the strong dollar

The dollar is up more than six percent against a basket of six major currencies in the last year, and up around 25 percent since 2014.

“The dollar is high because the US economy is a stronger performer right now than any other advanced economy,” said Barry Bosworth, a senior fellow at the Brookings Institution.

But economic optimism unleashed by investors’ hope that Trump will deregulate the economy and further enhance already healthy business profits is not the only factor behind a strong dollar. The interest rate policy of the U.S. central bank, the Federal Reserve (the ‘Fed’), is at least as important a reason for the greenback’s continuing rise.

By hiking its benchmark interest rates twice since December, the Fed has bolstered the dollar by enticing investors – including overseas investors – with the prospect of higher returns than they might gain elsewhere.

Trade deficits and and US manufacturing

President Trump made a concern over the decline of American manufacturing a central theme of his campaign. He has continued to address it the early months of his Presidency, saying he wants more goods made in the USA rather than imported.

Hard barriers?
Trump could try to dull the effect of the strong dollar by putting in place import duties to make foreign goods less competitive. However, if for example he put a 30 percent tariff on imports from Mexico, it is almost certain that the Mexican peso would drop in value against the US dollar to compensate, which could wipe out most of the impact of the tariff.

Only direct trade barriers could overcome this effect, in the form of hard quotas on, for example, the number of automobiles the US allows to be imported from Mexico annually. That, however, would contravene World Trade Organization rules.

Trade policy and monetary policy cannot be disentangled. On the plus side, a strong dollar lowers import prices, and also makes it cheaper for American investors to buy assets overseas.

On the other hand, a strong dollar hurts American exports and directly threatens Trump’s campaign pledge to correct the US trade deficit, particularly in the manufacturing sector, which has withered from Chinese and Mexican competition.

A strong-dollar policy works well for Wall Street interests, since it increases their ability to buy assets cheaply, both domestically and overseas. However, it hurts US exports and makes foreign goods more competitive in US markets. There is a direct contradiction.

“There’s a contradiction that goes back to one of the core messages of his campaign,” said Nathan Sheets, who served as under secretary for international affairs at the US Treasury under former president Barack Obama.

In late February, Treasury Secretary Steven Mnuchin, a former hedge fund manager and Hollywood film producer, said he supported a strong dollar in the “long term,” which he said should remain a stable reserve currency.

“The new administration is still working through its thinking,” said Sheets. “It remains to be seen which of those two narratives the administration will ultimately adopt.”

With material from AFP

How Hollywood has portrayed conspiracy theories

North Korea vows to respond to US aggression with ‘nuclear attack’