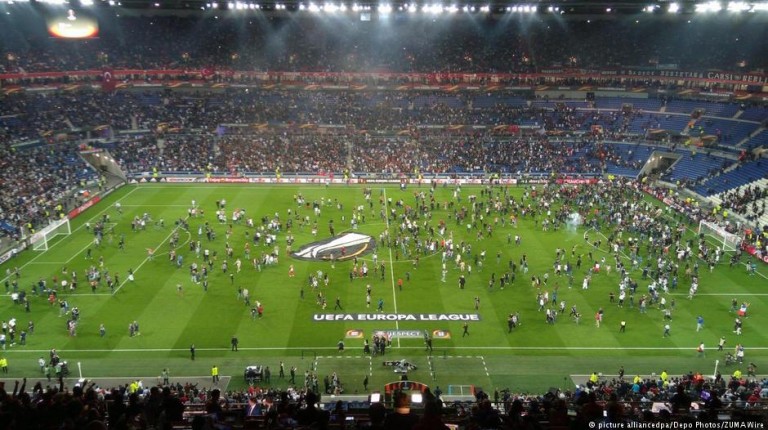 Lyon and Besiktas have accused each other after violent clashes saw fans spill on to the pitch and marred the Europa League match between the sides on Thursday. Both clubs now face UEFA charges.European football’s governing body announced on Friday that they have opened an inquiry in to a number of incidents that overshadowed Lyon’s 2-1 Europa League victory over their Turkish opponents on Thursday night.

The French club have been hit with four charges, including “insufficient organisation” concerning the segregation of supporters, while Besiktas were charged with throwing projectiles and crowd disturbances.

As hosts, Lyon could face a hefty fine or having to play their next European home match behind closed doors but the Ligue Un side believe the responsibility does not lie solely with them.

“As organisers of the game we are responsible,” conceded Lyon’s deputy chief legal director Vincent Ponsot on Friday. “Except that in this instance it’s clear we were victims of aggression from Turkish supporters.”

But their opponents, who will host the second leg next Thursday, saw things differently.

“The first priority of the home team is to provide a game played in secure and healthy conditions. If there is one who should be punished, it is Lyon, not Besiktas,” club spokesman Metin Albayrak told the state-run Anadolu news agency.

He added: “If a twentieth of the incidents were carried out in Turkey, Turkish clubs would be heavily punished.”

Kick off was delayed by 45 minutes on Thursday, after hundreds of supporters attempted to protect themselves from firecrackers and other objects raining down from the stands above. Two people were injured on a night where violence also erupted outside the ground and twelve arrests – including fans of both clubs – were made.

Ponsot said Lyon have asked UEFA for guarentees about the safety of their players in Istanbul.