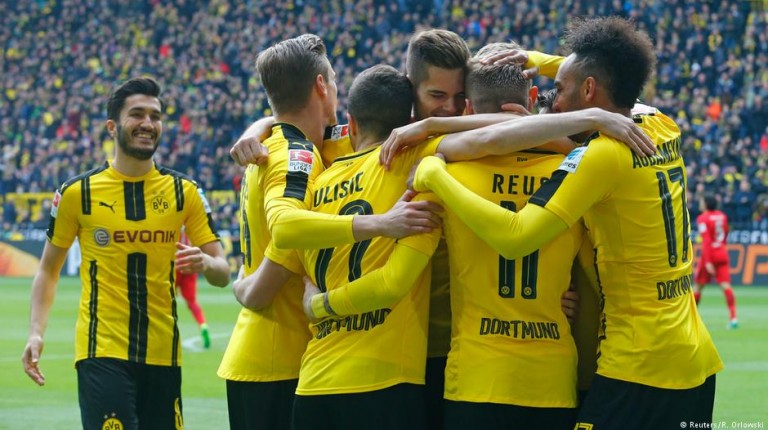 From an emotional day in Dortmund to a European race that no one wants and a relegation battle that almost everyone feels like they are in, here are the top talking points from Bundesliga Matchday 29.1. A powerful day in Dortmund

Football’s machine wouldn’t stop for Borussia Dortmund on Wednesday, but on Saturday, every single part of the club delivered a perfect response. In passages, particularly the opening 20 minutes, Thomas Tuchel’s team played some fantastic football – eventually securing a comfortable and deserved 3-1 win that included a comeback goal for Marco Reus. Afterwards, they held a Marc Bartra shirt aloft, with Sokratis even dedicating his goal to the Spanish defender. BVB’s famous fans had an extra level of emotion to them, with some even saying the atmosphere in Dortmund’s stadium had something extra to it. And the club, on this day, even had special corner flags to support equality. A routine win on paper, but in truth, it was much more than that.

While the top four places of the Bundesliga table are virtually secured for next season, Hertha, Freiburg, Cologne, Gladbach and Eintracht Frankfurt all lost on Matchday 29 as no one took a commanding step towards Europa League football. Freiburg were outclassed by Leipzig, as Gladbach were by Hoffenheim, and both Hertha and Cologne succumbed to sides fighting for their Bundesliga lives. All of this means that five points separates Hertha in fifth and Frankfurt in ninth. If Schalke, Leverkusen and Bremen hit form in the final five games, even they have a chance of snatching a European spot.

Suddenly, after almost half the league were involved in a relegation fight, no one wants to be involved. Augsburg got their first win after six games without three points, and Mainz and Wolfsburg also picked up much-needed victories. This was bad news for Ingolstadt, who sit four points back despite their recent resurgence. Leverkusen’s point against Bayern moves them four points clear of the drop, and while they (and Werder Bremen) may still be dragged in, it seems the fight will be between those in the bottom six (Darmstadt aside).

A superb tactical display was how Julian Nagelsmann’s Hoffenheim beat Bayern, but they showed they can win another way on Matchday 29 when they put five goals past Gladbach in an eight-goal thriller. Nagelsmann’s masterstroke to bring Adam Szalai back into the starting line-up worked as he scored two, but it was Hoffenheim’s brutal attacking power that impressed. Sensational goals from range have also become a regular occurrence for the Sinsheim club, and with that just one strength on a list of many it is no surprise that Hoffenheim continue to push Dortmund for that coveted third-placed finish in the Bundesliga.

Bayern Munich have the kind of squad depth most other Bundesliga teams can only dream of. But if there were two players the club cannot do without then Manuel Neuer and Robert Lewandowski would be the pair. Fortunately, Neuer made his Bundesliga return for the club’s game against Leverkusen, but Lewandowski was still out – and it showed. Thomas Müller gave his best, but as has often been the case this season that has not been good enough. It’s not just his clincal nature that was missing – Lewandowski scored a late winner against Freiburg and saved face for Bayern in Berlin in the 97th minute – but also his movement. All of Bayern’s Champions League hopes rest on the Pole’s shoulders, but in Leverkusen, it was clear how far he has brought them domestically.