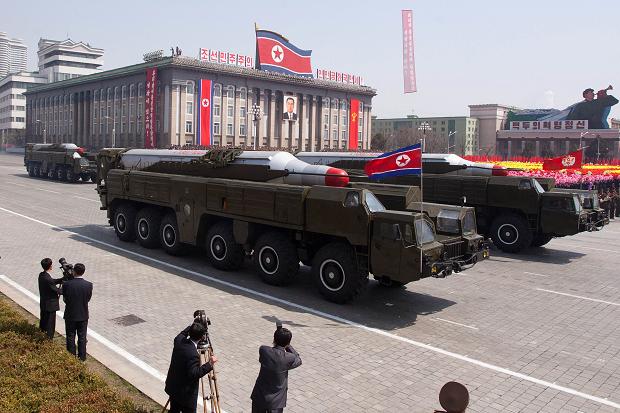 The North Korean communist regime on Saturday used the 105th birth anniversary of Kim Il Sung, the country’s “eternal president,” to exhibit its military strength and signal to the United States its readiness for war.

With the US Navy deployed near the Korean Peninsula, and experts speculating that Pyongyang was preparing another nuclear test, the tensions have been rising in recent days.

The huge military parade on Saturday showed off what appeared to be the country’s increasingly sophisticated military hardware, including ballistic missiles, to the accompaniment of marching music and a large audience.

“We will respond to an all-out war with an all-out war and a nuclear war with our style of nuclear attack,” Choe Ryong Hae, a top North Korean officer, said. Choe is considered by outside analysts to be the country’s most powerful official after the leader Kim Jong Un.

US President Donald Trump’s recent bombings in Syria and Afghanistan have stoked fears about a possible US attack on North Korea. The communist country has been regularly conducting nuclear and missile tests defying United Nations’ resolutions and sanctions.

Previously, the North Korean military threatened to unleash a “merciless” response against American targets, including the naval task force the US recently deployed.

“The closer such big targets as nuclear powered aircraft carriers come, the greater would be the effect of merciless strikes,” according to the statement carried by the KCNA news agency.

At the same time, the army urged Washington to “come to its senses” and find a “proper” solution to the current stand-off.

Chinese Foreign Minister Wang Yi said Friday “everybody will end up as a loser” if a war breaks out on the Korean Peninsula. All sides need to show restraint, he added, or risk the situation getting out of hand.

“One has the feeling that a conflict could break out at any moment,” Chinese Foreign Minister Wang Yi said after meeting his French counterpart Jean-Marc Ayrault.

Wang added that history has shown that the use of force is not a solution. “On the Korean Peninsula issue, it is not those who use harsher words or raise bigger fists who would win” he said. “Once the war breaks out, everybody will end up as a loser, and there will be no winners.”

“Therefore, we urge all parties to refrain from provocations and threats […] so as to avoid getting the situation there out of hand, and into an irreversible dead end,” he told reporters in Beijing.

“As long as dialogue takes place, it can be official or unofficial, through one channel or dual channels, bilateral or multilateral. China is willing to give support to all of them,” he said.

US President Trump has vowed that Pyongyang would not be allowed to create a missile capable of delivering a nuclear warhead to American territory. According to a White House foreign policy advisor, the US was assessing military options to that effect.

“North Korea is a problem,” Trump said on Thursday. “The problem will be taken care of.”

In a separate appearance on the Fox Business Network, Trump said that North Korean leader Kim Jong Un was “doing the wrong thing.”

“He is making a big mistake,” the US President said.