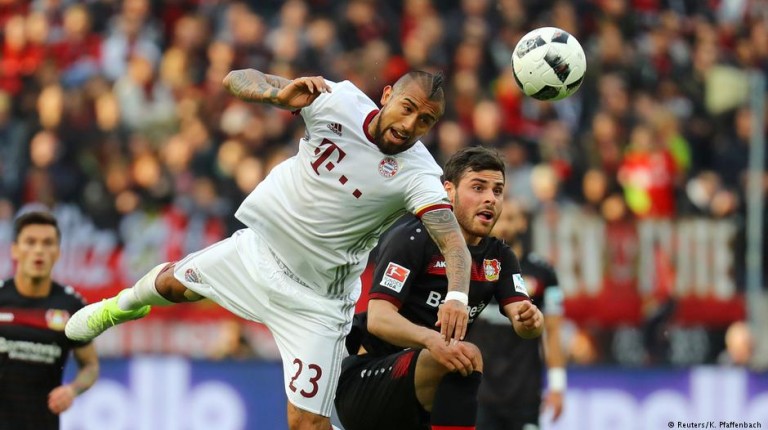 With five games remaining, very little is set in stone in the Bundesliga. DW takes a look at the key battles in the race for the title and European qualification and the nerve-shredding scrap to avoid the drop.The title

Bayern Munich require a maximum of seven points to make it five straight title wins. With three of the Bundesliga’s bottom six to come in the next three matches (Mainz and Darmstadt at home, Wolfsburg away) Carlo Ancelotti’s men will probably expect to have wrapped it up before travelling to face their only remaining competitor in the penultimate round of league fixtures.

RB Leipzig have notched up four straight wins after a brief wobble in March. They face Schalke away, Ingolstadt at home and Hertha Berlin in the German capital before they welcome Bayern to the Red Bull Arena on May 13. The eastern club are unlikely to be able afford the luxury of any dropped points and their fate has long been out of their hands.

Hoffenheim, who have enjoyed a remarkable season under the increasingly impressive Julian Nagelsmann, and Borussia Dortmund, who have experienced a more mixed campaign, will amost certainly be Germany’s other two representatives in next season’s Champions League. Third-placed Hoffenheim are seven points off second while the gap from Dortmund in fourth to Hertha in fifth is 10 points.

But the difference between third and fourth in the Bundesliga is more than just a squabble over the minor places. Whoever finishes in the higher place will avoid the Champions League qualifier that determines who makes the group stages. Both sides have run-ins that appear to be of a similar difficulty level, so it could well come down to the meeting between them on May 6 at Signal Iduna Park. Despite their first leg loss to Monaco, Dortmund’s run in could well be complicated by the Champions League and they also face Bayern in the German Cup semifinal on April 26.

This is where the Bundesliga table starts to get a little complicated. Should Bayern or Dortmund win the Cup, the team in seventh would join those in fifth and sixth in the Europa League, as Hertha Berlin did last year.

Fuelled by the goals of Anthony Modeste, Cologne currently occupy that spot, but either side of them is a cluster of clubs who retain continental hopes. Hertha are in the box seat in fifth, three points ahead of the Billy Goats, but struggling for form while even Bayer Leverkusen, in 12th, aren’t out of the race – they’re just four back from their neighboring rival.

Such a tight race means a lot will come down to form. In that respect, Werder Bremen are serious contenders. The Green-Whites have picked up 23 points from their last nine matches (over 2.5 points per game) and have risen to eighth on the back of that run. They play Europa rivals Hertha and Cologne on matchdays 31 and 32 respectively.

Though Leverkusen and even Schalke in 11th may still be looking over their shoulder, the relegation battle is likely to be fought by the bottom six clubs. Darmstadt’s late win over Schalke on Sunday will almost certainly be no more than a stay of execution – they need to win every game (including that trip to the Allianz Arena) and hope their rivals lose every one of theirs.

Ingolstadt are also deep in trouble after their rejuvenation in recent weeks was halted by fellow strugglers Wolfsburg on Saturday. They are now four points from Augsburg in the playoff spot and face Bremen (home) and Leipzig (away) in their next two games. Two wins might give them some hope but they are likely to need three at least – 37 points looks likely to be about the number that will get a club in the playoff.

That berth is currently occupied by Augsburg who picked up a much needed win over Cologne on Saturday to break a sequence of one point from five games. The good news for Augsburg is they host Hamburg, who sit one point and two places above them, in a fortnight. The bad news is they also have to play Dortmund, Gladbach and Hoffenheim.

Currently, Augsburg, Hamburg, Wolfsburg and Mainz are separated by a point, so any games between them are likely to prove decisive. Hamburg’s clashes with Mainz on May 7 and Wolfsburg on the final day – both at the Volksparkstadion – are massive for HSV. Two wins for any of those four clubs should be enough but at least one of them is likely to fail.

What to watch out for on Bundesliga Matchday 29