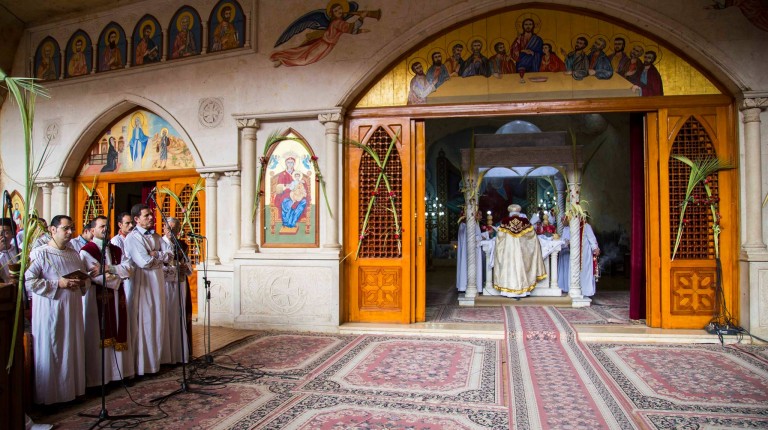 According to a statement from the ministry, the arrested men were members of the outlawed Muslim Brotherhood. The statement added that the 13 men had orders to plant bombs in several cities and to attack Copts, security personnel and state institutions, “in order to spread chaos.”

The raids were executed with permission from the prosecution.

Eight of the arrested men live in the city of Basarta, which is known as a stronghold of supporters of the Muslim Brotherhood. The city was surrounded and raided several times.

The ministry said that the farms included secret tunnels and hideouts. The Police found large amounts of ingredients and tools for making explosives as well as weapons.

The defendants will be interrogated by the State Security Prosecution.

In a similar context, the National Security Prosecution decided on Sunday to detain three suspects for 15 days pending investigations on accusations of involvement in the Palm Sunday terrorist attacks on two churches in Tanta and Alexandria, which killed at least 45.

According to state media, the three suspects face charges of joining an outlaw group that “aims at obstructing the rule of law and preventing state institutions from working, as well as assaulting the personal freedoms of citizens, especially Christian citizens, attacking their houses of worship and properties, in addition to targeting public institutions with the aim of destroying the state and jeopardising public order by using terrorism as a means to achieve their goals.”

However, it is noteworthy that allegedly brotherhood-affiliated terrorist organisations like Hasm have in the past distanced themselves from attacks on churches.

The three suspects are named Salama Wahballah, born in 1982 and a law school graduate working at a water wells drilling company, Abdul Rahman Hassan Mubarak, born in 1982, working in an institute affiliated to Al-Azhar and Ali Hussein Shehata, born in 1978 and holding a technical diploma, according to information provided earlier by the Ministry of Interior.

They were arrested on 13 April as the ministry revealed the identity of the Tanta church suicide bomber as Mamdouh Amin Mohamed Boghdady, who the ministry said belonged to a terrorist cell operated by a suspect on the run called Amr Saad Abbas Ibrahim, who in turn holds extremist and takfiri beliefs and was previously involved in an attack on a checkpoint located in El-Naqab region near Kharga Oasis, where eight police officers were killed.

This comes as the Ministry of Interior revealed Wednesday the identity of the perpetrator of the Alexandria bombing. In a statement, the ministry said the suicide bomber was named Mahmoud Hassan Mubarak Abdullah, an employee at a petroleum company born in 1986 and having lived in Suez.

The statement said he was part of a terrorist cell, which was also behind the December attack on St. Peter and St. Paul Church during Sunday mass.

The three detained suspects and the Tanta suicide bomber were among a list of 19 initially announced by the ministry as wanted members of a terrorist cell. The ministry offered an EGP 500,000 reward for citizens who provide useful information to arrest fugitives, guaranteeing protection of their identities.

After the deadly bombing that targeted churches in Egypt last week, security forces have been intensifying raids to capture alleged perpetrators.

Throughout the last three days, security presence has increased on the streets all over the county. Security forces guarded streets near churches, blocking cars, and checking pedestrians approaching churches.