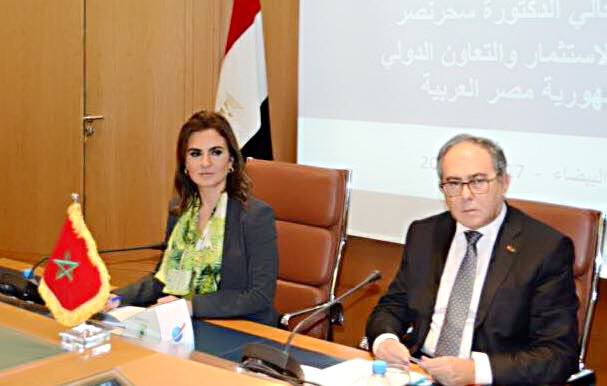 Minister of Investment and International Cooperation Sahar Nasr has met with a group of Moroccan investors to discuss an increase in Moroccan investments in Egypt over the upcoming period, especially in the Suez Canal Economic Zone (SCZone). The visit came on the sidelines of the annual Arab financial institutions meeting in the Moroccan capital, Rabat, for which she led an Egyptian delegation.

During the meeting, Nasr stressed that Egypt welcomes Moroccan investments within the framework to develop the joint cooperation between the two countries. She also reviewed the reforms carried out by the government over the past period in order to help provide the best climate possible for investors.

She added that the main goal for her ministry at this point is to enforce the Investment Law, which is currently being examined by the parliament.

During the meeting, Moroccan investors voiced their most prominent projects and the challenges facing them, in addition to their future plans to increase their investments.

The investors have expressed their desire to increase their investments in Egypt, making Egypt a base for the Egyptian-Moroccan integration to penetrate African markets—from the east through Egypt, and from the west through Morocco.

“There is coordination between all ministries to recognise the available investment opportunities across the country, where a clear comprehensive plan is being implemented to put Egypt on the global map of investment through facilitating work for investors,” Nasr said.

Nasr has agreed with El Mehdi Tazi, president of the Tangier Mediterranean Economic Zone, to increase the cooperation between the free zones in both Egypt and Morocco. Tazi stressed that he would like to enhance the cooperation with the Suez Canal Authority.

Morocco is ranked 42nd on the list of countries with largest investments in Egypt. The number of Moroccan companies in Egypt is 186, where 80 of those work in the service field, 37 in the industrial field, 28 in the construction field, 14 in telecommunications, 16 in tourism, 7 in agriculture, and 4 in financial leasing.