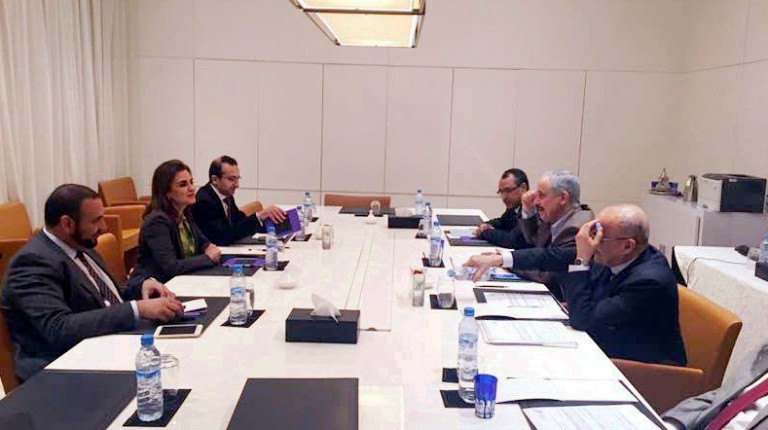 Minister of Investment and International Cooperation Sahar Nasr met with Sidi Ould Tah, director general of the Arab Bank for Economic Development in Africa, on the sidelines of the joint annual meetings of Arab financial institutions, commissions, and financing funds in the Moroccan capital, Rabat.

They also discussed efforts exerted by the bank to support the development of African countries with funds granted by the bank to them. The bank is considered an independent international financial institution owned by 18 member states of the League of Arab States, and it aims to support economic, financial, and technical cooperation between African countries and the Arab world.

Nasr stressed the need to increase the financial support provided from the bank to African countries. The Egyptian government is keen on strengthening ties with Africa due to the continent’s importance representing the strategic depth of the Arab Republic of Egypt.

Nasr pointed out that the coming period will witness a significant presence of Egyptians in African countries in order to support the bank’s efforts by widening the presence of Egyptian construction companies. Many Egyptian experts will also be dispatched in order to improve the cadres of African countries, through organising training courses to improve levels of efficiency and skills development, as well as to increase Arab exports generally.

Nasr pointed out that Egypt is keen to support the Egyptian-Afro-Arab cooperation and is interested in establishing an effective partnership between the public and private sectors throughout Egypt and other Arab countries, which is based on the integration of resources and capabilities to address common challenges.

The two sides discussed the corporation’s efforts to ensure investment and export credit to support and encourage the efforts of Egyptian exporters to develop their exports to Arab and non-Arab countries and increase Egyptian exports directed to international markets. The corporation is providing comprehensive insurance coverage to the dues of related companies.

The corporation also provided a comprehensive insurance coverage for rental operations across the border, as well as domestic trade insurance against the risk of failure of buyers to pay their dues.

The two sides discussed arrangements to revive the idea of establishing an Arab investment commissions complex to begin the ratification of the basic system of the complex. It is expected that the Arab Investment and Export Credit Guarantee Corporation, the General Authority for Investment and Free Zones, and the Investment Promotion Foundation in Lebanon are expected to be included in these commissions.