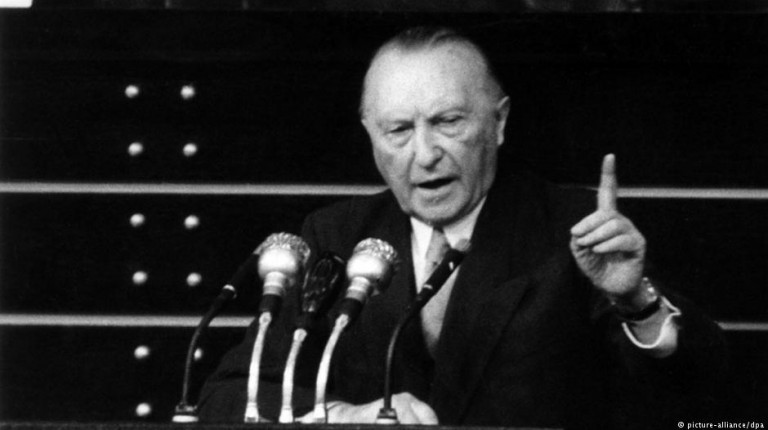 He became the first post-war chancellor of Germany at the age of 73 – and led the country for the following 14 years. Fifty years after his death on April 19, several aspects of Adenauer’s life remain to be explored. Political scientist Hanns Jürgen Küsters is the director of the scientific services and archives of the Konrad-Adenauer Foundation. He recently published the book “Konrad Adenauer – Der Vater, die Macht und das Erbe – Das Tagebuch des Monsignore Paul Adenauer 1961-1966” (Konrad Adenauer – The Father, the Power and the Heritage – the Journal of Monsignore Paul Adenauer 1961-1966) and also co-organized the exhibition “Unity Only in Freedom – Konrad Adenauer and the German Question,” which goes on show at the German Historical Museum in Berlin on April 22.

DW: Tell us about the new book about Konrad Adenauer you’ve published.

Hanns Jürgen Küsters: In 2015, when the housekeeper of Konrad Adenauer’s son, Paul Adenauer, who was a priest, died, one of his journals was discovered. When I got to read this material, I immediately knew it provided unique insight into Konrad Adenauer’s work and life in the late years of his chancellorship and the years that followed. At the time, Paul Adenauer was living in his parents’ house again and his diary covers the period from 1961 to 1966, up until his father’s death in 1967.

What did you find most fascinating about this diary?

These records are particularly interesting because they not only provide insight into the current events of the time; they also reveal how Adenauer felt personally, how he discussed personal things with his son. It also provides the perspective of the son on his father. It offers new nuances for Adenauer researchers, as his son was with his father almost every day, so he knew him in a unique way that doesn’t compare to what others knew of him.

He apparently had little time for his children when they were young. This later relationship offers an interesting contrast.

Paul Adenauer, born in 1923, was the second son from Konrad Adenauer’s second marriage. During the first 10 years of his life, he didn’t get to see his father much, as he was so deeply involved in regional and communal politics as the mayor of Cologne at the time.

When he was dismissed from his office as mayor of Cologne in 1933, it opened a new perspective on his father for the son, who visited him relatively frequently in Maria Laach [Eds. A Benedictine monastery where Konrad Adenauer stayed for several months during the war, fearing reprisals if he were to return Cologne]. Paul became aware of the spirituality of this convent, and it is during this period that he developed his desire to become a priest. His father was very skeptical about his son’s wish. Yet in the end he could not stop his son’s calling to become a priest.

You have mentioned that Konrad Adenauer was forced out of office in 1933, as he had positioned himself against the Nazis. Could you tell us more about this period?

After 16 years in office as the mayor of Cologne, Konrad Adenauer was expelled by the Nazis when they took power in 1933. He lived deprived of public functions until 1944. He fought to claim a pension during this period. He had a family to provide for and these existential problems made him suffer from depression. He is even said to have considered suicide. It was really a difficult period for him.

Although he was not a member of the resistance, he always expressed his views against the Nazis. He also aimed to overcome nationalism in 1945 through an international approach. That was one of his motivations to push the European Union forward. He particularly aimed to establish alliances with the West, with liberal parliamentary democracies, and to bring the Germans on the western track.

On an international level, he searched to establish these connections because – beyond overcoming nationalism and promoting European integration – he also assumed that economically interdependent western democracies would no longer wage war against each other.

How would you describe his character?

Konrad Adenauer had a rough-edged personality, and he was well aware of the importance of his office. I believe that when he became chancellor at the age of 73, he was the right man at the right time at the right place. He was ready to take responsibility for the reconstruction of Germany and its modernization. But he was also someone who wasn’t always easy to deal with. He was quick-witted. He always approached politics with strong pragmatism. When he had a goal in mind, he’d always try to find his way to implement it. He was true to his principles. Those are character traits that weren’t always well received.

Beyond being a politician, he also had an unexpected creative side, working on many inventions throughout his life. What do you know about this aspect?

Adenauer was very technically skilled. He had already made various inventions in the 1910s. He came up with an emergency bread recipe to improve the food supply during World War I. He invented, for example, an illuminated darning egg and a spout for a watering can. He always had fun trying out technical things. Additionally, he always looked to see if he could make money through his patents – that certainly played a role.

The weekly “Der Spiegel” recently revealed that the former chancellor had spied on his political opponents. What’s your reaction to this information?

I think this is not really something new. There is a commission of historians in charge of evaluating the files of the German intelligence service (BND). We knew that the then-BND director, Reinhard Gehlen, was in contact with the chancellor. Still, I am not sure whether Konrad Adenauer had given the order on this. We know from other sources that Reinhard Gehlen tried to elevate his profile by providing a lot of information to the chancellery. So we would have to further examine the files to determine whose initiative it really was. However, the decisive aspect remains, of course, that the BND provided the information it had collected to the chancellery.

The content just published by “Der Spiegel” on this matter is, to a large extent, well-known to Adenauer researchers, and, in this sense, not really new.

In your opinion, what’s the image we should keep of the first chancellor?

I believe the merits of Konrad Adenauer are that he was ready to take responsibility in 1945, during a difficult phase of German history, when he could have otherwise retired from politics.

Konrad Adenauer is certainly the founding father of the Federal Republic of Germany; he has ensured that liberal parliamentary democracy was introduced in Germany – which was not obvious at the time. He led the Germans to Western democracy, which is still the basis of our political order today. He promoted rapprochement with Israel and reconciliation with France. He was a co-founder of the European Community. These are values that remain essential to us to this day.