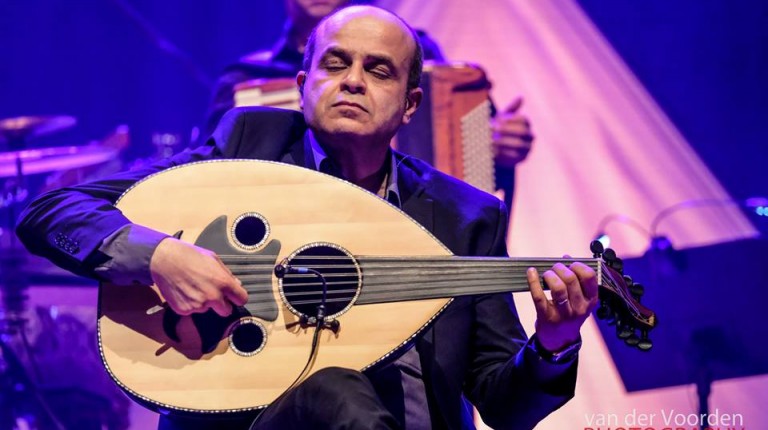 On Thursday night, on the hills overlooking the pyramids of Egypt, Souad Massi and the Cairo Steps band will come together for a performance that will combine folk music with a touch of classical music and jazz. The upcoming experience, described by the project creators as “one of a kind”, combines a variety of artists coming from different countries and with different musical backgrounds.

On this occasion, Daily News Egypt met with iconic Algerian singer, musician, and songwriter Souad Massi and Cairo Steps’ Egyptian-German band leader and oud (lute) player, Bassem Darwish. Two days before the concert, it was a chance to grab a better perspective of the new project, the circumstances both international artists work under, and to discover more about their future plans.

Massi is excited about having a new genre added to her popular songs in the project titled “The Best of Souad Massi.” The Algerian singer will be performing some of her masterpieces, including “Gheir Enta”, “Rawy”, “Khalouni”, and other songs that have built memories for a whole generation.

Darwish is enjoying the Egyptian-Algerian-German combination and the first collaboration with accordion player Wael El-Sayed, amid plans to launch the project from Egypt to the world. Deeply attached to Egypt, Darwish will focus on having an Egyptian theme reflected well in this new project.

How did this project come to live and why did you choose Souad Massi and her music?

Souad Massi is popular, and her work made me feel that we can produce something with an Egyptian flavour, combining classic and jazz music with her old songs.

The project had started a year ago and was initially called “Nostalgia”. It was supposed to be launched at the Cairo Opera House, at the main theatre. However, Massi had a few health problems, which was why it was postponed until February 2018. In between, we got an opportunity to do it sooner, but privately, not through the Egyptian government.

What is your story behind Cairo Steps?

I studied Egyptology and ethnology, and, as a student, I was already involved in music. I travelled to Germany in 1988 and became closer to jazz music. I had a particular interest in Nubian and Sudanese music and started working on that. I always found roots of our songs in their songs—something which I didn’t know about before, so I came to Egypt to explore more.

I remember that Nubian singer Mohamed Mounir assigned me to trace back the origins of a song called “So ya So”—before it became a hit. I went to Upper Egypt and found it.

Then, I met well-known German pianist Matthias Frey and we composed together. We reached sounds that were plausible to both his German and my Egyptian ears, so we concluded that we were on the right track.

We worked on soundtracks and succeeded in cinema. Step by step, we grew bigger. Today, we are a total of 15 members consisting of Egyptians and Germans. The band has a complete team, which includes sound and light engineers. I believe performing music is not just about getting on a stage; it is an entire drama.

How does the Souad Massi project differ from previous ones you did, such as “Mouled Al-Milad” and “Arabiscan”?

I did Mouled Al-Milad with the belief that it was about time we started saving what can be saved in this society, because I think that, over the past 20 years, we have lost our values and tolerance towards each other. This isn’t the Egypt I knew. I was encouraged by big names in the field to produce something, where each of us respects the other’s belief, finds common ground, and concentrates on the human and social message.

I found that I succeed when I can bring in an audience, where they all deal with one another as humans regardless of religious differences. Mouled Al-Milad is a long-term project which I agreed to have annually with the Opera House.

“Arabiscan” was born under different circumstances, as I was depressed after the 25 January Revolution and the takeover of the Muslim Brotherhood. I wanted Arabiscan to sound like “Afghanistan”, believing that my country was going down a dark path. Currently, I see little hope.

What about upcoming projects?

Firstly, I am hoping to work more with blind musicians in my next project and to include more of them in my band. The participation of Wael El-Sayed in the Souad Massi project is a first step.

Secondly, I would like to have a project that targets children in Upper Egypt, to whom I can take musical instruments for them to carry instead of one day carrying weapons.

How is your experience dealing with the Egyptian government and the Cairo Opera House, especially since you are responsible for bringing a lot of musicians from abroad?

The Cairo Opera House administration and media people are professionals. I have been dealing with the house for 20 years, so we now know each other, and they have always provided me with whatever I needed. On my part, I also try to have a concert for free when I am scheduled for three.

If you mean routine and bureaucracy, well I know that, and I deal with it by adapting. It would be naïve to try to use a European system in Egypt.

However I find some laws catastrophic to art. One of them would be a sort of a tender system where the state would go for the “cheapest artist.” This is really bad. There are further complicated procedures when it comes to paying insurance and collecting your profits. Moreover, there are expensive fees to be paid to the Musicians Syndicate. All of this drives many famous artists to go to other Arab countries.

Since I know the system, I always keep part of the money from concerts in Germany so that it would be allocated to the budget of my concerts in Egypt.

I hope that we don’t continue to kill opportunities we might have because of these complications. I think it is extremely important to host international artists and have that kind of cultural exchange.

Egyptian bands perform at the Citadel