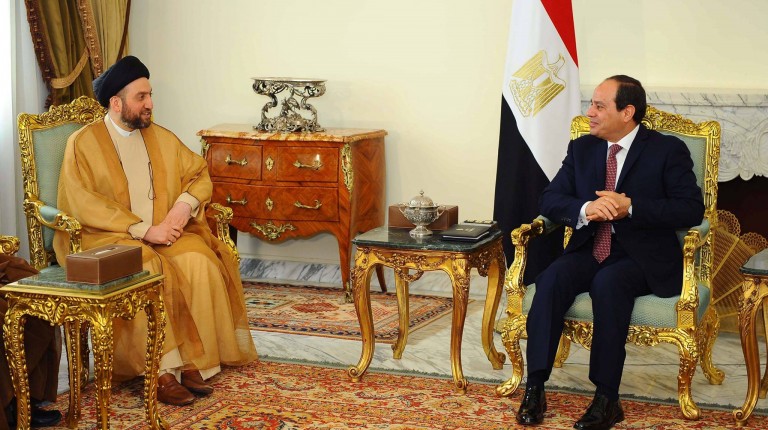 Egypt is committed to supporting Iraqi unity and sovereignty and the efforts that aim at restoring security and stability in Iraq, President Abdel Fattah Al-Sisi said in his meeting on Tuesday with the head of the Iraqi National Alliance, Ammar al-Hakeem.

The meeting called for a strategic alliance between Iraq and Egypt in the fields of politics, economics, security, and counterterrorism, indicating that this alliance is the culmination of the countries’ historical roles and will benefit their status on the Arab and regional levels.

The duo’s meeting mainly focused on the importance of finding solutions to overcome various political conflicts in Iraq and prevent factions seeking to ignite sedition and sectarian violence in the country. They also reviewed updates in Iraq and the ongoing efforts to achieve a national reconciliation among the different sectors of the Iraqi people.

Al-Sisi stressed the importance of solidarity and unity among all Iraqi factions to achieve national reconciliation, adding that strengthening unity will prevent attempts to cause division among the country’s factions.

Al-Hakeem stressed that Iraq has five priorities: its unity, Arabism, sovereignty, democracy, and a sense of belonging for all citizens. He pointed out that these priorities are not only important for Iraqis, but also for the country’s national security and the region as a whole, according to the Iraqi National Alliance statement.

He also urged that any other option that diverges from uniting Iraq will have repercussions on the whole region because of the country’s influence and political reach.

In this regard, he called on Egypt and the other Middle Eastern countries to support any course of action to settle the turmoil in Iraq, regardless of the significance of helping displaced people return to their home towns and of reconstructing cities liberated from the grip of IS.

In response to this, Al-Sisi expressed full support for Iraq in confronting terrorism and for the national reconciliation project.

Al-Hakeem expressed his thanks and appreciation for Egypt’s support, stressing that Egypt plays a pivotal role as a cornerstone for security and stability in the region.

During the meeting with Abdul Aal, al-Hakeem reviewed the Iraqi army’s victories in fighting IS, especially in the battle to restore the city of Mosul. He also provided to Abdul Aal an overview of the initiative to settle the political situation in the country.

In addition to this, Abdul Aal stressed the need of strengthening joint parliamentary relations between the Egyptian and Iraqi parliaments.

Abdul Aal confirmed the special relations between Egypt and Iraq throughout history, pointing to Egypt’s keenness to support Iraq.