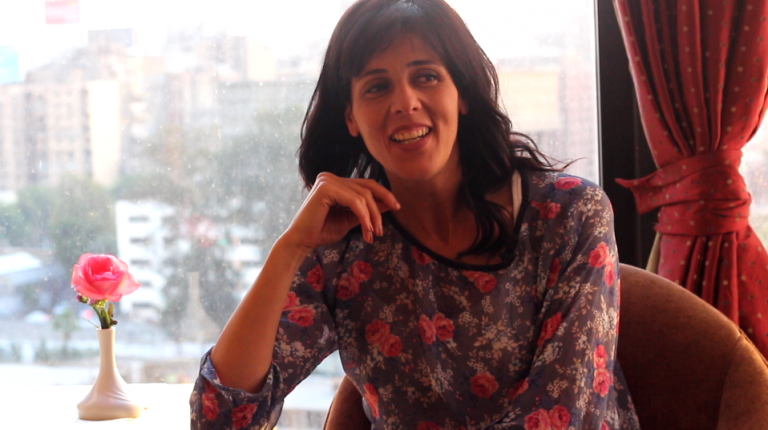 On Thursday night, on the hills overlooking the pyramids of Egypt, Souad Massi and the Cairo Steps band will come together for a performance that will combine folk music with a touch of classical music and jazz. The upcoming experience, described by the project creators as “one of a kind”, combines a variety of artists coming from different countries and with different musical backgrounds.

On this occasion, Daily News Egypt met with iconic Algerian singer, musician, and songwriter Souad Massi and Cairo Steps’ Egyptian-German band leader and oud (lute) player, Bassem Darwish. Two days before the concert, it was a chance to grab a better perspective of the new project, the circumstances both international artists work under, and to discover more about their future plans.

Massi is excited about having a new genre added to her popular songs in the project titled “The Best of Souad Massi.” The Algerian singer will be performing some of her masterpieces, including “Gheir Enta”, “Rawy”, “Khalouni”, and other songs that have built memories for a whole generation.

Darwish is enjoying the Egyptian-Algerian-German combination and the first collaboration with accordion player Wael El-Sayed, amid plans to launch the project from Egypt to the world. Deeply attached to Egypt, Darwish will focus on having an Egyptian theme reflected well in this new project.

How did you get to meet Bassem Darwish?

I was introduced to Bassem Darwish through producer Mahmoud Youssef, who brought me to Egypt several times. They had talked about me working with Darwish on a classical genre.

What were the circumstances under which you left Algeria as a young female singer, to participate in the “Festival des Femmes Algériennes” in France?

I was 25 years old when I left Algeria. I didn’t really plan to; it was a coincidence that I was invited by a French-Algerian organisation to participate in the festival. I remember very much the exact date I went to France: 9 January 1999.

The festival was beautiful. The idea was that even though we suffered, we, Algerian female artists, were presenting artwork about our country. There were different types of arts, such as theatre, music, writing, dancing, etc. There were more than 2,000 people at the festival.

The situation in Algeria back then was difficult during the civil war. It was tough for artists, especially women, and concerts were impossible to have. We wanted to send a message of hope amid all the sadness of the war. I believe this is one of our roles as artists.

You have repeatedly spoken about difficulties for you as a woman, ever since you were a child. What are some of those difficulties?

I remember that it was not possible for me to walk in the street carrying my guitar. I would have been insulted with everything you can imagine. I was lucky that my two brothers were really supportive and helped me a lot. They used to come with me to the Faculty of Arts and carry my guitar for me. It was my only solution at the time.

How do you view the status of Algerian women today?

Much has improved. Women were given opportunities and they are now holding leading positions in various fields. Even if I wouldn’t say we are living in the best conditions, I see progress. People’s mentalities have changed. A female artist used to be regarded as a woman with a bad reputation, but this has developed.

How did you think of and produce your successful album “Al-Motakalemoun” (Masters of the Word) in literary Arabic?

I received some criticism for bad pronunciation. I try to correct myself each time, and I received help from people from all around the world. I appreciated their initiatives, and I like to learn.

I was inspired while working on a project called “Aswat Cordoba” (The Voices of Cordoba), where I worked on Andalusian poetry. The idea of taking the words and turning them into music came to me. I made my selection according to verses I remembered from school, like Al-Mutanabbi, Elia Abu Madi, Ahmed Matar, and others.

Your song “Houria” (Liberty) was extremely inspiring to people. What does freedom mean to you?

I was inspired by the great poet Ahmed Matar. He was brave and was not afraid of the tyranny of Arab regimes, so that people would be able to one day live in freedom. I liked his words. I used to read them and imagine how it was happening: a teacher writing the word freedom on the board but which no student was able to understand. I liked it.

To me, freedom is to be able to think differently. This is something we didn’t grow up with in the Arab world, because we were told it was dangerous and forbidden. Freedom is expression and thought. I read poetry and philosophy, and I was surprised that people like Ibn Khaldoun or Ibn Roshd were free to think centuries ago, while nowadays we create more barriers for ourselves.

Did you predict the Arab Spring in that song, released in 2010?

I don’t really know, but I must have felt something because I was surprised at the degree of awareness of the youth in different countries I visited. But it was unexpected and nearly impossible to imagine that the Arab world would change in the way it did, but not everything that happened was positive. I think we need more awareness and education to be able to demand our rights.

How did the anti-Arab and anti-Islamic hate speech that followed the recent waves of terrorist attacks affect you while you were in France?

I was shocked and saddened. I mean people going to the theatre, in their own country… if someone has a problem with the living style of the country, why did they come? They can simply leave, but why kill innocent people?

On the other hand, the incidents came as my album was being released, and it affected its promotion negatively because I heard things in the media such as “we don’t want to give attention to the Arab or Muslim culture,” so many doors were closed.

You have an increasing fanbase all over Europe. How do you see your popularity in the Arab world, and how was your experience participating in the large production of “Bokra” operetta?

I am happy where I am. I have beautiful fans with beautiful minds. I am honoured to have fans who look like me in their minds. Most of them are students. I just don’t have a particular plan to grow here or there.

The operetta was a distinguished work. Are you kidding? Quincy Jones called me. I was so excited!

The aim of the operetta was to build schools for children. It was a great opportunity to meet with Arab singers I didn’t know.

How was your acting experience in “Eyes of Thieves”, and would you act again?

Before “Eyes of Thieves”, I received nearly ten film offers, but I never could commit because of the tours. This one was directed by my friend Najwa Najjar. She chose me, and I agreed.

Overall, it was a very difficult experience. I stayed one month in Nablus, a city under siege, which means that you become isolated from the world. You hear bullets all night. There are places you cannot go to in the city, and there are soldiers everywhere.

The acting world itself is also tough, even though I learned a bunch of things including shooting techniques, lighting, etc. I would do it again if I personally feel close to the character I am asked to play.

Have you thought about the next album already?

Yes, it will be similar to my first album, “Rawy”. Most songs will be in Algerian, one of which may be in classical Arabic, and I will improve my pronunciation.

Egyptian Students Less Likely to Study in US

Egyptian bands perform at the Citadel