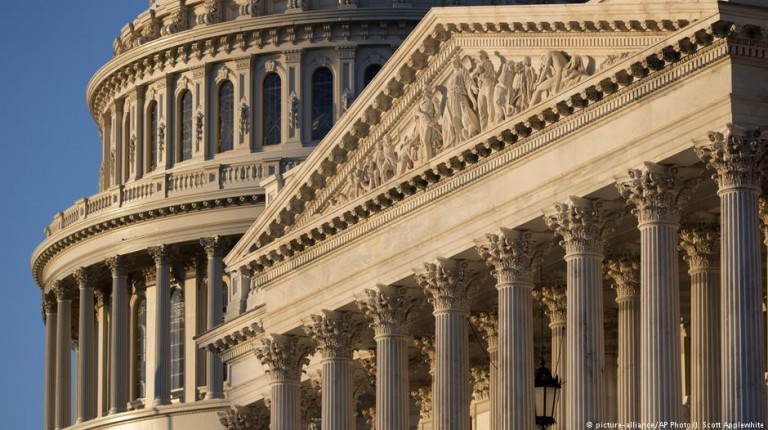 The battle against US President Donald Trump’s rollback of environmental protections is increasingly being fought in the legal arena, with new lawsuits recently launched to stop actions on pesticides and Arctic drilling.For eight years, environmental advocates in Washington expended their daily efforts lobbying the Obama administration to strengthen environmental protections in the United States. But these days, they’re more likely to be found in a courthouse than in the White House.

The first half of April saw the emergence of three new lawsuits against the Trump administration’s anti-environmental executive orders. Last week, the Pesticide Action Network and the Natural Resources Defense Council (NRDC) sued the administration for canceling a planned ban on a controversial pesticide linked to brain damage in children, which had been put in place by the Obama administration.

The week before, environmental groups began planning lawsuits against Trump’s moves to loosen smog limits, and open Arctic and Atlantic waters for drilling.

Meanwhile, a coalition of 17 US states led by New York filed a legal challenge against Trump’s executive order rolling back energy efficiency regulations put in place by Obama. The states say the federal government has a legal duty to regulate carbon emissions to protect the climate.

All of this has taken place since Scott Pruitt, the climate-denying former Oklahoma attorney general Trump put in charge of the Environmental Protection Agency (EPA), took control three months ago.

Before taking over, Pruitt spent years suing the EPA himself, trying to prevent the agency from putting stricter environmental protections in place.

But now the tables have turned: Some of the people who were on the receiving end of Pruitt’s lawsuits at Obama’s EPA have quit, and have joined environmental groups in suing Pruitt’s EPA.

‘At war with the American people’

“It was a very dramatic shift,” David Doniger, NRDC director of climate and clean air programs, told DW about the EPA’s move to undo itself. But this shift has been engineered in a thin layer at the top of agency, he added – without involving career staff.

In the case of the pesticide suit, Pruitt is overruling the EPA’s pesticide experts. “He’s at war with his own agency,” Doniger said. “But much more importantly, he’s at war with the American people.”

“If you look at opinion polls, the vast majority of American people reject the idea of rolling back air and water pollution controls,” Doniger said.

The takeaway from the election should not be that people voted for dirtier air or water and unsafe chemicals, he added.

But Doniger acknowledges that it is not just legal battles US environmental groups want to win. Part of the purpose of the lawsuits is to win in the court of public opinion.

“Every lawsuit, every step we take in the administrative process, is a moment to raise the profile of these issues in the public discussion and to engage people,” he said.

Tallying up the actions

Since taking office three months ago, Pruitt and Trump have been busy working to undo a number of Obama-era environmental protections. The greatest unraveling to date came on March 28, when Trump signed an executive order ending the Clean Power Plan meant to implement US emission reductions under its Paris Agreement commitment.

At the same time, he also ended a 2016 moratorium on coal leases on federal lands, along with ending record-keeping of the federal government’s carbon emissions and tracking the social costs of greenhouse gas emissions.

Also in March, Trump approved the controversial Keystone XL pipeline project, which would connect Canada’s oil sands to refineries in Texas. He has green-lit permitting for the contentious Dakota Access pipeline.

The administration has also begun a process to undo Obama-era emission requirements for motor vehicles manufactured starting in 2022, and roll back Obama’s measures to improve car fuel economy to levels consistent with European Union specifications.

In addition to all this, he has ordered a review of the Clean Water Act, the central US tool for dealing with water pollution.

The lawsuit attempting to stop Trump from killing the ban on the pesticide chlorpyrifos, a neurotoxin, will be the first test case in a slew of lawsuits being prepared by the environmental groups against Pruitt’s EPA.

Initiated by legal advocacy group Earthjustice, the group has already filed seven lawsuits against the Trump administration – but this is the most high-profile and will likely come to court the fastest. The pesticide is most used by Dow Chemical, which markets it under the name Lorsban.

The US government blocked the chemical for residential use in 2000 due to health concerns, but it was not until 2014 that the Obama administration put into place plans for a full ban on applications for food last year.

The EPA released an assessment in November concluding that current usage of the pesticide presents risks to drinking water and the human diet. But last week Pruitt ignored the findings of his agency and reversed the ban. “We are returning to using sound science in decision-making,” he said in a statement.

Doniger says Pruitt’s reasoning won’t fly in a court of law. “One of the hallmarks of the American legal system is that agencies have to have a compelling record that explains their decisions and backs up the factual propositions with evidence,” he says.

“The courts often give a lot of leeway to agencies on scientific matters, but they don’t like it when the agencies contradict their own record.”

More lawsuits are likely to follow based on the same grounds – that the agency is taking decisions that contradict its own findings.

Alternative fuel vehicles on the rise in Europe