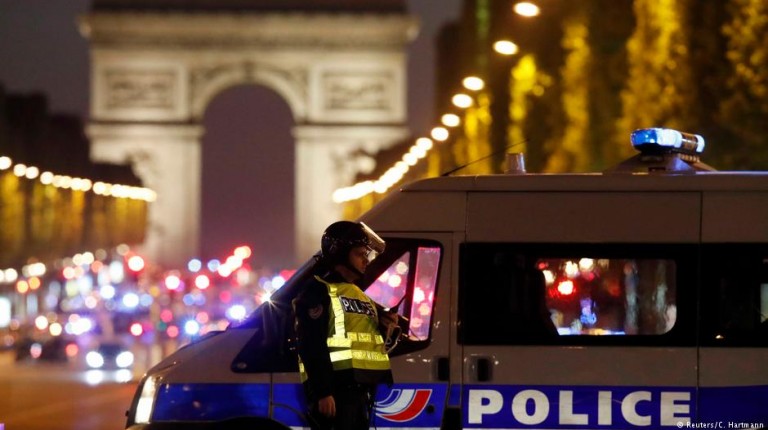 A policeman has been killed on Paris’ Champs-Elysee in what President Francois Hollande has described as a terrorist incident. The so-called “Islamic State” has claimed responsibility. The assailant has been killed.The so-called “Islamic State” (IS) jihadist group claimed responsibility for Thursday’s attack on Paris’ bustling Champs-Elysees in which a police officer was shot and killed. At least two other officers were seriously wounded.

While authorities did not confirm any links between IS and the assailant, President Francois Hollande said at a press briefing that he was convinced the incident pointed to a terrorist attack.

The assailant was neutralized by other police officers in the vicinity. Reports suggest that he was known to security services and had previously been flagged as an extremist. He is believed to have entered France by train from Belgium. France’s anti-terrorism prosecutor Francois Molins said investigators had verified the identity of the shooter and that searches were underway. The identity was not released.

Earlier reports suggested that at least one other attacker was complicit in the assault. However, eye witness accounts seemed to counter these claims. Prosecutors said they are trying to determine whether the assailant had any accomplices while police raided at least one location in the eastern suburbs of Paris.

France has been under a state of emergency since 2015 after a spate of Islamist militant attacks that have killed more than 230 people in the country in the past two years.

Amaq, the propaganda agency affiliated with the so-called “Islamic State,” said the jihadist group had claimed responsibility for the shooting and that the gunman was a member of the group. However, the claim from IS came uncharacteristically quickly following the attack. French intelligence has not yet confirmed any connection between the attacker and the jihadist group..

Paris police spokeswoman Johanna Primevert told The Associated Press news agency that the neutralized attacker had deliberately targeted police officers guarding the area near the Franklin Roosevelt metro station at the center of the avenue.

French Interior Ministry Spokesman Pierre-Henry Brandetsaid told reporters that the assailant had fired an automatic weapon against the polce, “a weapon of war.”

Video footage shared on Twitter shows the world-famous shopping mile teeming with police vehicles, as well as officers armed with machine guns and clad with helmets and bullet-proof vests following the incident. Helicopters were also seen flying low across the French capital.

A number of metro stations in the area were closed, as “maximum security” precautions were taken. Explosives technicians were also dispatched to the scene.

Police have also urged civilians to avoid the area and comply with police instructions.

French counter-terrorrism prosecutors announced that they opened an official probe into the assault. President Hollande has scheduled an emergency security cabinet meeting on Friday. The Ministry of the Interior has meanwhile implored the public to only share verified information about the event.

Speaking to reporters several hours after the shooting, anti-terrorism prosecutor Francois Molins thanked the police for showing great courage in neutralizing the assailant and preventing a potential blood bath.

The German foreign office has expressed its condolences to the victims, saying it would remain shoulder-to-shoulder with France.

French elections around the corner

The incident took place just days ahead of Sunday’s first round of presidential elections. The 11 candidates were appearing on televsion, making their final election pitches to voters, as the assault happened shortly before 9pm local time (1900 UTC).

Conservative Francois Fillon and far-right candidate Marine Le Pen both said they would cancel campaign events that had been scheduled for Friday.

Centrist candidate Emmanuel Macron offered his thoughts to the family of the slain officer, while socialist Benoit Hamon tweeted his “full support” to the police in their fight against terrorism.