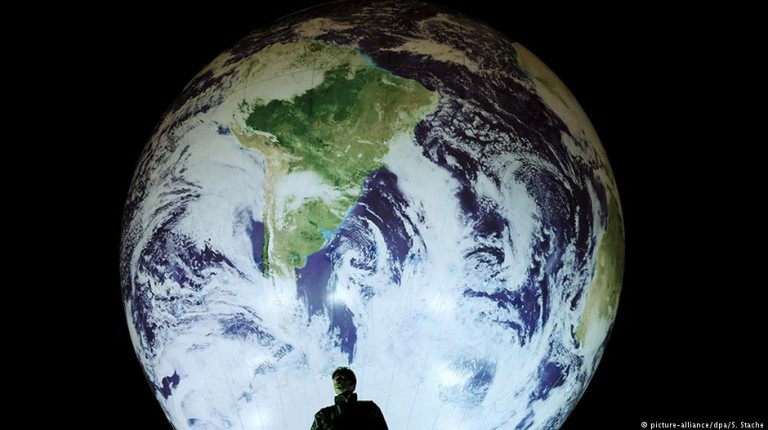 Some people are skeptical that human activity is driving global warming. We take a look at the most common arguments used by climate deniers, and set the record straight.Despite a 97 percent scientific consenus on the issue, some still dispute the idea that human activity is causing climate change. With this year’s Earth Day focusing on climate and environmental literacy, DW examines some of the most common myths and misconceptions used by climate change skeptics.

1. If global warming is real, then why are we still experiencing record-cold winters? Isn’t the planet supposed to be getting hotter?

It is true that we have observed colder temperatures in some areas. The winter of 2009 to 2010 in particular was unusually cold in Europe, and overall sea ice around Antarctica has even increased somewhat.

But it would be wrong to use this as evidence against global warming. Many different factors influence the Earth’s climate, alongside human activity.

The El Niño phenomenon is the main culprit of these bizarre weather patterns. Every four years or so during the winter season in the Northern Hemisphere, warmer-than-usual sea surface temperatures appear along the South American west coast, which affects trade winds around the world and can feed into large winter storms in areas like Europe.

Although ice cover in the Antarctic has increased in recent years, the exact opposite is occurring in the Arctic Circle, where there is currently less ice than any winter in recorded history. The Antarctic is lucky in the sense that it is surrounded by strong winds and ocean currents, which protects it from outside climate influences to some extent.

But the reality is that an increase in average temperatures on Earth has been observed since systemic measurements begin back in 1880.

The year 2016 was the warmest on record, with 2015 and 2014 taking second and third place, respectively. According to the Intergovernmental Panel on Climate Change (IPCC), the average global temperature has increased 0.85 degrees Celsius (about 1.5 degrees Fahrenheit) from 1880 to 2012. So although there will always be outlying cold weather events, there is really no disputing that the temperature is in fact increasing around the world.

2. The Earth has heated and cooled throughout its history – climate change is a natural phenomenon. Humans have had nothing to do with it in the past, this current warming is just a natural fluctuation.

Yes, the Earth’s climate has changed many times over the course of millions of years as part of natural environmental processes.

But the scary thing is that this particular warming phase, over the last 50 to 150 years, has occurred much faster than any other time in history.

Climate change skeptics often argue that CO2 emissions from human activity alone could not influence the Earth’s climate to such an extent. They point to the fact that CO2 emissions also come from other sources such as volcanoes, and that high levels are naturally controlled by plants and the permafrost cycle.

The problem is that our greenhouse gas emissions disrupt the existing balance, whereby the planet is unable to absorb and release the CO2 as it normally would. This problem is made even worse due to increased deforestation.

The IPCC considerers it “highly probable” that human influence has been the primary cause of global warming since the mid-20th century. Since 1750, the concentration of CO2 has increased by 40 percent, and methane by 150 percent.

Although skeptics also often try and highlight the 3 percent of scientists who are not certain that human activity is driving climate change, these researchers are frequently from conservative think tanks such as the Cato Institute, which is funded by companies such as Volkswagen and other groups that rely on the continued use of fossil fuels.

3. We can’t even accurately predict tomorrow’s weather forecast. How can we be sure of what our climate will look like 100 years from now?

It’s a common enough scenario: you check the weather forecast and are excited to see sunshine predicted for the weekend. But instead, you are disappointed by grey skies and rain.

It’s important to know that the weather forecast and climate models are essentially two different things. The weather is short-term, often unpredictable, and is influenced by a variety of factors.

The climate, on the other hand, is long-term, and unpredictable weather events get balanced statistically. It is much easier to observe an increase in global temperatures over several decades, as opposed to predicting changes in weather on an hour-by-hour basis.

According to the IPCC, the reliability of climate forecasts has improved significantly in recent years, so we can be confident in their predictions – and hopefully act accordingly.

4. So what if the temperature increases by a couple degrees? The Earth is resilient, it will pull through like it has before.

At face value, in increase of 2 or 3 degrees doesn’t seem like much at all. But on a global level, even a minor change in temperature can have extreme consequences.

This translates into an increase in extreme weather events such as droughts and storms – even wildfire. Sea levels are rising due to melting glaciers, and many highly populated areas increasingly find themselves underwater.

And if we don’t start implementing ambitious climate protection goals soon, the IPCC says the average global temperature could rise by 5.4 degrees be the end of the 21st century.

The Earth’s climate is unpredictable by nature, and its inhabitants have had to adapt themselves many times in the past. But natural adaptation has its limits – and we are running out of time to mitigate the more severe consequences of manmade climate change.

Why is the Arctic melting faster than the Antarctic?