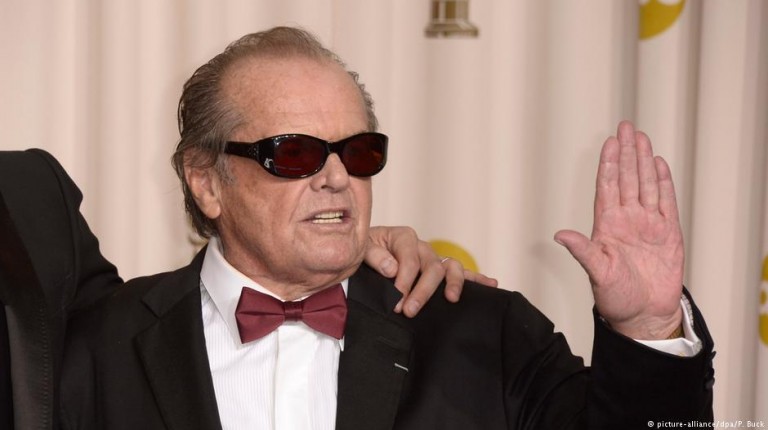 “Easy Rider,” “Chinatown,” “The Shining,” “Batman” and more… As Jack Nicholson celebrates his 80th birthday on April 22, here’s a look back at some of the superstar’s numerous iconic roles.Jack Nicholson achieved his breakthrough with the cult film “Easy Rider,” in the role of an alcoholic lawyer named George Hanson. In one of the most iconic scenes of the film, he meets the two bikers depicted by Peter Fonda and Dennis Hopper in front of the local police station after spending a night with them in the town jail. While the bikers are gearing up to hit the road, Nicholson takes out a bottle of Jim Beam and declares, “Here’s the first of the day, fellows,” before taking a swig. A twist in his face is accompanied by an unexpected reaction as he lifts an elbow and starts flapping his arm like a chicken’s wing while cackling an enigmatic: “Nik Nik Nik…”

With this role, Nicholson earned one of the 12 Oscar nominations of his career – which makes him the most nominated male actor in Academy Awards history. If he’s known by everyone as an actor, it is often forgotten that he has also worked as a producer, scriptwriter and director too.

Born on April 22, 1937, in New York, Nicholson grew up in New Jersey. He started acting in school, where he was the class clown.

In 1954, he followed his mother to Los Angeles. Nicholson took an office job at MGM studios, all the while training to become an actor.

His first appearance on screen came with the TV series “NBC Matinee Theater,” in 1956. Two years later, Jack Nicholson met independent film director and producer Roger Corman. It turned out to be a decisive meeting, as Corman was about to start filming a series of B-movies.

Among them was the 1960 black comedy horror film “The Little Shop of Horrors,” in which Nicholson played a dentist’s masochistic patient. The movie about a plant that feeds on human flesh became a cult hit. From then on, Nicholson was part of Corman’s cinematic family, acting with stars such as Boris Karloff, Vincent Price and Peter Lorre. He also co-directed for the first time with Corman on “The Terror” (1963), on which he also had a lead role.

In the mid-1960s, Nicholson also started writing for the screen and one of his scripts, “The Trip” (1967), directed by Corman, became one of the first films ever to depict LSD trips.

As a friend of the actors Peter Fonda and Dennis Hopper, he was invited to jump on a Harley with them for “Easy Rider” in 1969. He was also one of the executive producers of the landmark work and, according to producer Bert Schneider, he also made sure Fonda and Hopper didn’t kill each other during the shoot. “Easy Rider” became the most successful film of the New Hollywood period defined by young, innovative directors. Nicholson’s image of the unshaven anti-hero perfectly fit into the spirit of that era.

One of the faces of New Hollywood

Still, Nicholson’s name didn’t guarantee a film’s success yet. The very sociable actor was always ready to help out friends by acting in their average projects. He was therefore always busy shooting, but for every successful film he did, three others were flops.

Another milestone film would come his way in 1974, when he starred in Roman Polanski’s “Chinatown.” In the film, set in Los Angeles in the 1930s, he plays private investigator Jake Gittes, who gets drawn into a murder, corruption and incest story.

“Chinatown” became one of the most critically-acclaimed films of the 70s, firmly establishing Nicholson’s reputation as a character actor.

Just one year later, he received his first Oscar for his performance in “One Flew Over the Cuckoo’s Nest,” directed by Milos Forman, and became one of Hollywood’s top stars while performing challenging roles. In the film, he plays the recidivist criminal Randle McMurphy, who lands in a mental institution where patients are submitted to electroshock therapy and forced medication.

After these hits, things slowed down a bit for Nicholson. He experimented as a director in the western-comedy “Goin’ South” (1978), among others – but that didn’t become a hit.

Another one of his most iconic roles came in 1980, with “The Shining,” Stanley Kubrick’s adaptation of Stephen King’s same-titled novel. Nicholson starred as the unsuccessful author Jack Torrance, who settles with his wife and son in an empty, mountain-isolated hotel. Hired as its caretaker while the hotel is snowed-in during the winter, Torrance starts to go crazy. “The Shining” is now regarded as one of the great horror film classics, even if some critics found Nicholson overdid his depiction of madness.

In the 80s, Nicholson acted in several films that weren’t so memorable. But one notable production was “Terms of Endearment” (1983), by James L. Brooks, in which he plays a retired astronaut who falls in love with his neighbor (Shirley MacLaine) and helps her develop her relationship with her daughter. The role earned him his second Oscar, this time for best supporting actor.

One of his most enigmatic roles came in 1989 in Tim Burton’s “Batman,” in which he plays Batman’s grinning opponent, the Joker. The film earned over $400 million (372 million euros) at the box office. It was Nicholson’s most successful film. A percentage deal in his contract also allowed him to earn a record-breaking salary for the role, estimated between $60 million and $90 million.

Backed by this success, he directed in 1990 a sequel to “Chinatown,” entitled “The Two Jakes.” However, his directorial style was deemed too predictable and the film was a flop.

With the 1997 comedy “As Good as It Gets,” Nicholson was back on track with another huge success. Starring as the neurotic novelist Melvin who spares no one from his homophobic and racist insults. Nicholson picked up his third Oscar for his performance.

He was also convincing in the role of an Irish-American mobster in Martin Scorsese’s “The Departed” (2006), picking up a Golden Globe and BAFTA nomination for best supporting actor.

Now turning 80, the Hollywood star was thought to have retired – his last film was back in 2010. But he’s been slated to star in a remake of the critically-acclaimed German film “Toni Erdmann,” so we might get to see him as a clowning octogenarian dad on the big screen.

How Hollywood has portrayed conspiracy theories