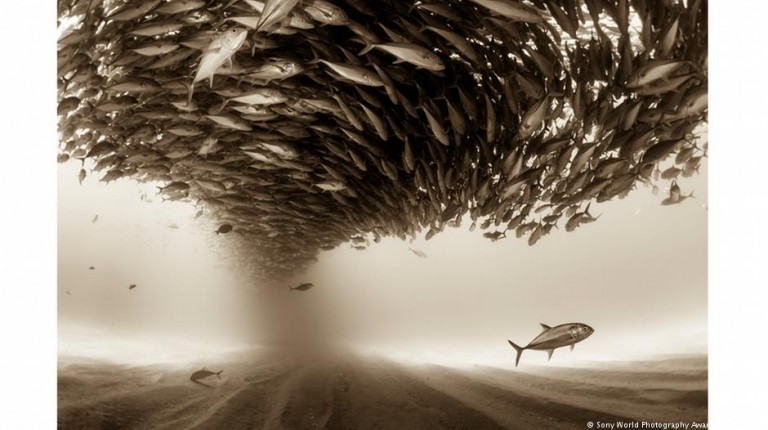 Incredible wildlife photos, next-gen cars, rhinos and frosted plants. Join us as we take a look through the lens at some green events from around the world over the past week.Nature and animals make for stunning photo subjects. Now some of the most amazing images in that category were honored this week at the Sony World Photography Awards. This gorgeous picture of a swarm of Jacks in the Sea of Cortez off the coast of Baja California in Mexico “only” won third place in the category “nature.”

Back on dry land, this high-tech vehicle seems to be as far-removed from nature as you could imagine but don’t let its looks fool you. This space ship on wheels is one of the eye catchers at this year’s Shanghai Auto Show. The concept car, developped by Chinese start-up NIO is a fully electric vehicle, so it’s not just stylish but good for the environment as well.

Out in the wild, there was some sobering news this week when a new study revealed that illegal wildlife trafficking occurs in newly 30 percent of all UNESCO sites. Such poaching has always been an issue but the problem has grown dramatically in recent years. That’s probably not so surprising when you consider that almost a third of all remaining tigers and 40 percent of the African elephants that are left, live in protected areas.

In Germany, “April weather” is a term that describes unpredictable, often rapidly-changing weather. This past week was a good example of that as the temperatures in much of the country dropped from summer-like sunny warmth to below freezing in just a few days, often accompanied by snow and hail. This photo shows an apple blossom encased in ice. This didn’t happen accidentally though. Farmers sprayed their plants with water intentionally as the icy coat on the blossom actually protects it from the sub-zero temperatures.