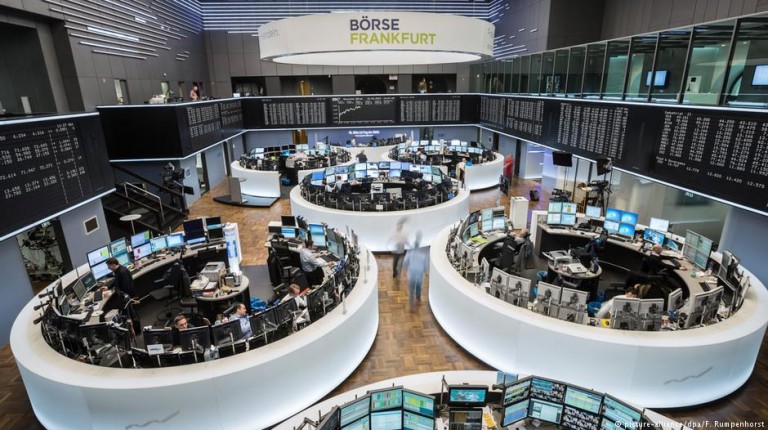 Germany’s blue-chip share index has surged to a record as investors were relieved by the success of French presidential candidate Emmanuel Macron, with rising German business sentiment adding to their joy.The index of 30 leading German stocks was up three percent touching 12,417 points Monday morning – comfortably above the previous record of 12,391 which it reached in April 2015.

Wolfgang Albrecht, analysts with German regional lender LBBW doesn’t believe though that the new all-time high will be “a sustained jump above the old record.”

“May is being seen as an especially weak month for markets and that could negatively impact investors’ appetite for risk,” he said in a note to investors.

With gains for almost all the major firms listed on the index, the biggest winners were lender Commerzbank, which gained more than nine percent, while bigger rival Deutsche Bank added 7.39 percent.

Stock markets across Europe shot up Monday after independent candidate Emmanuel Macron – running on a pro-business platform – reached pole position in the first round of presidential voting in France. This has allayed fears that the continent’s second-largest economy could quit the EU and the euro single currency, as was proposed by his two main rivals.

Anti-EU firebrand Jean-Luc Melenchon is now out of the race, while Macron must still face far-right candidate Marine Le Pen in a runoff on May 7.

Ifo’s closely-watched index, published on Monday, climbed to 112.9 points from 112.4 points in March, beating analyst expectations to reach its highest level since July 2011.

Businesses were much more confident about the present economic situation but slightly gloomier about the future outlook, the survey of around 7,000 firms showed.

“The mood in German boardrooms has improved again,” commented Ifo president Clemens Fuest, noting that “the German economy is growing powerfully,” despite the slightly less positive expectations for the coming months.

Looking to different sectors, manufacturers were less upbeat than in March, while retailers, wholesalers and construction firms all saw the mood improve.

Analyst Carsten Brzeski of ING Diba bank noted that the German economy “seems to have entered an almost endless positive cycle,” due to economic reforms in the past, low interest rates, a weak euro and strong private and public consumption.

Germany, and basically the entire eurozone, could become “the positive growth surprise of 2017,” he added.

After many ups and downs, stocks end flat for 2011