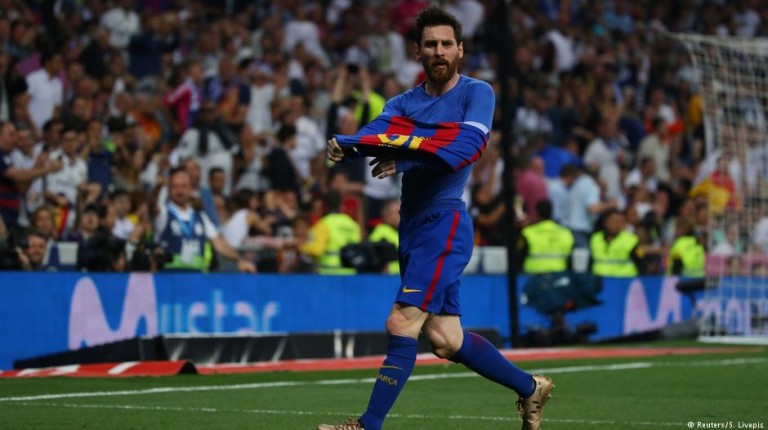 An entralling encounter between Spain’s biggest clubs saw end-to-end action, a bloodied superstar and a last-minute winner. The race for the La Liga title is wide open once more.These were 90 minutes no-one at the Santiago Bernabeu Stadium in Madrid on Sunday will ever forget. Lionel Messi notched his 500th goal for FC Barcelona with the final kick of the game to give the Catalans a 3-2 win over Real Madrid.

The home side had started the game strongly, creating several chances and taking an early lead. But the advantage only lasted five minutes as Messi, left with a bloodied mouth after an elbow from Marcelo, put Barcelona back on level terms.

In an end-to-end affair, Ivan Rakitic then gave Barca the lead with a stunning, curling effort in the 72nd minute. Moments later, Real Madrid’s Sergio Ramos was sent off a harsh tackle on Messi.

But Real kept pushing forward while down a man. James Rodriguez, on as a substitute in the 81st minute, smashed Vieira’s cross home from close range to make it 2-2.

With one last attack in the final minute of stoppage time, Barcelona hit the hosts on the counter attack. Sergio Roberto’s brilliant run through the midfield opened up the left side for Jordi Alba’s low feed to Messi inside the penalty area. Messi calmly slotted his shot into the bottom-left corner to put Barcelona ahead.

“(Messi) is the best of all time and I have seen a lot of football matches and videos,” said FC Barcelona coach Luis Enrique.

Messi’s 500th goal was the final kick of the night. He heads the scoring charts in Spain with 31 for the season and has scored the most goals in “El Clasico”.

The two rivals are now tied atop La Liga with 75 points each with five weeks remaining in the season. Barcelona have the advantage in the head-to-head but Real Madrid have a game in hand.

“There will be much more of a title race, but it is still in our own hands,” said Real Madrid coach Zinedine Zidane.