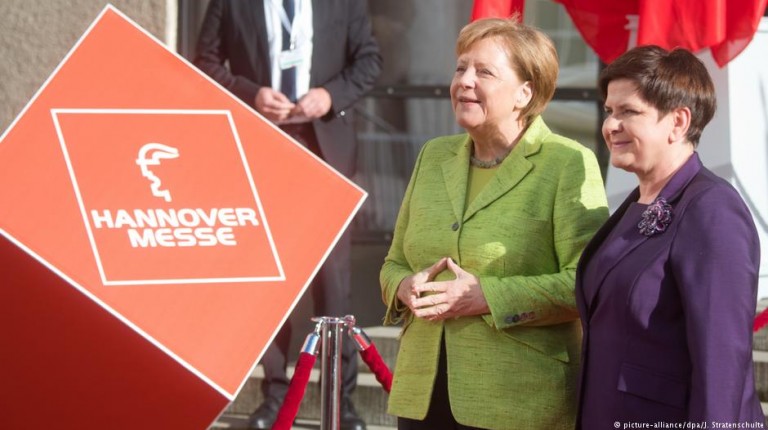 German chancellor Angela Merkel has opened the world’s biggest industrial fair. Poland is the partner nation of the fair that also seeks to allay fears from technological advances associated with Industry 4.0.During he traditional opening walk around the Hannover Messe fairground, the German chancellor made a plea for free and open trade, saying isolationism and protectionism would only lead to losses for society as a whole.

In Hanover this year, Poland’s industry is at the center of the fair. The five-day trade fair, which is in its 70th year, also focuses on networked industry, with robots playing an increasing role in the approximately 6,500 exhibitions from more than 70 countries.

“Poland is coming, and we are assuming that Poland will become an increasingly important trade partner,” said Carl Martin Welcker, the president of the VDMA in an interview with Reuters.

The focus of this year’s fair is Industry 4.0, which exchanges data on manufacturing techologies over cloud computing, energy transformation and automation of labor.

Poland is one of the fastest growing markets for automation in manufacturing, but there’s still room for industry to improve its competitiveness. “Many companies are still at the level of Industry 2.0, with only 15 percent of the factories fully automated, 76 percent partly automated, and the rest still being handled by hand,” explained Heidler.

Robots and humans can coexist

Amid tensions on factory floors over the risk of losing jobs to robots, the Hannover Messe will attempt to alleviate concerns.

Exhibitors will demonstrate how machines can coexist alongside human workers and offer support in factories. Although job changes are inevitable, robots can adapt to the speed and behavioral changes of humans, said trade fair boss Jochen Koeckler.

“Robots learn from robots,” said Koeckler. “But it is human beings who tell the robot what tasks need to be done.”

To adapt from manual jobs to commanding robots will demand higher qualifications and greater expertise of technology and programming explained Stefan Assmann, head of Bosch’s connected industry unit. There is no need for fewer workers at the automotive supplier company.

More than 1,700 panels will take place at the Hannover Messe with 6,500 exhibitors and a further 1,200 journalists from around the globe.

Opinion: Germany’s Green Card was ahead of its time