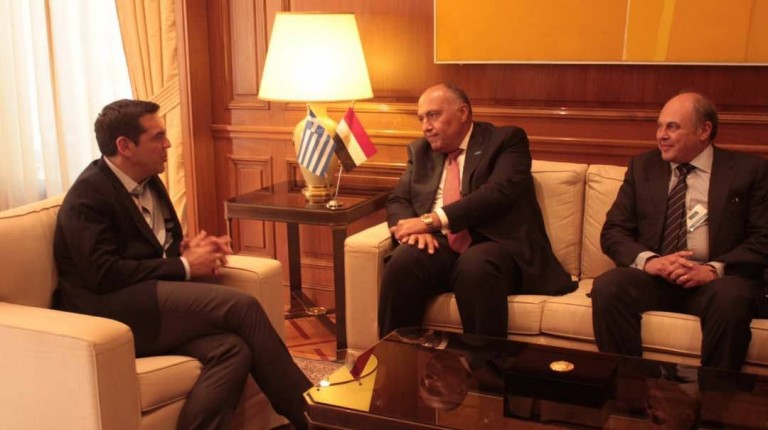 Tsipras expressed his condolences for the latest churches attacks in Egypt and asserted Greece’s aspirations to work with Egypt and Cyprus on different projects in the upcoming period.

The Ministry of Foreign Affairs spokesperson, Ahmed Abou Zeid, said that Shoukry explained the Egyptian stance on regional issues, including Syria, Iraq, Libya, Palestine, and Yemen, as well as talking about fighting terrorism.

“Tsipras praised Egypt’s vision in dealing with terrorism and conflicts in the region, emphasising that Egypt is the cornerstone of stability in the Middle East,” Abou Zeid added.

Shoukry also met with the Greek minister of defence to discuss illegal immigration, ways of fighting terrorism, and cooperation between the two countries in the fields of electricity and waste management.

On the sidelines of the forum, Shoukry also met his Chinese counterpart, and is scheduled to meet the Iraqi minister of foreign affairs as well, according to local Egyptian newspapers.

The Ancient Civilizations Forum included talks between Greece, China, Bolivia, Egypt, India, Iraq, Iran, Italy, Mexico, and Peru, with the objective of using culture as a power in foreign policy, according a press statement from the Greek ministry of foreign affairs.