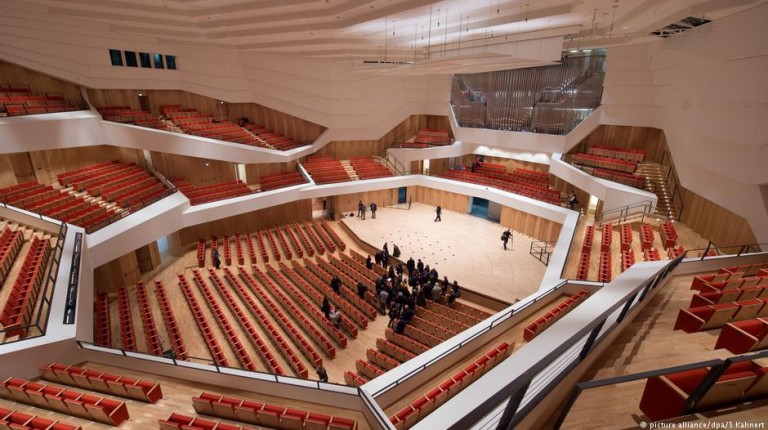 After Hamburg’s “Elphi”, as the Elbphilharmonie is affectionately known, Dresden opens the “Kulti”, the refurbished and re-designed Kulturpalast on April 28th. The sound is expected to be much improved.The jubilant opening celebrations have hardly ended in Hamburg’s Elbphilharmonie concert hall when roughly 400 kilometers to the southeast a new sound venue is to be festively opened with a concert by the Dresden Philharmonic Orchestra. The Dresden Kulturpalast, dating from 1969, in the past five years has undergone extensive refurbishment work costing some 100 million euro ($109 million). The overhaul is expected to provide the resident orchestra, which was founded in 1870, the kind of acoustics it could only until now enjoy when touring in Tokyo, New York or London. The venue will also incorporate the central library and the “Herkuleskeule” cabaret hall.

The fact that the overhaul of the “Kulti”, as locals affectionately call the concert hall, cost over 15 million euro more than originally planned will in time be nothing more than a footnote.

The concert hall when it was originally constructed in the late 1960s at a cost of 60 million East German Marks, it was for its time the biggest multi-purpose building project of the former East Germany. The “Kulti” building, the exterior of which is under a preservation order, for the people of Dresden was always a house of culture and not of power.

As the home base for the philharmonic orchestra, but also music festivals ranging from classical to Dixieland as well international dance competitions, the venue quickly established itself as a meeting place for culture fans. Famous orchestras from around the world played here as well as big names from rock, pop and jazz. Over the years stars like Paco de Lucia, Pat Metheny, Milva, Zucchero and Bruce Springsteen as well as local bands have graced the stage here. The St. Petersburg ice-skating ballet also regularly used to spin their pirouettes on the stage of the Kulturpalast.

That is now all history, also for the Philharmonic Orchestra. It has spent the last five years playing interim venues within the city. Not easy for any orchestra. Following first rehearsals principal conductor Michael Sanderlin said:”The hall is spectacular. It impresses with its warmth and acoustic comfort. For the Philharmonic Orchestra and for Dresden this is really a great gift.” With hindsight the maestro thinks the time the orchestra has had to spend having to improvise and adapt to different venues was also a bonus. “The orchestra has gained huge degrees of flexibility in musical language as well as being quick to adapt.”

Ready to rock again after terror scare at Rock am Ring

Dresden’s Church of Our Lady celebration defies xenophobia with music