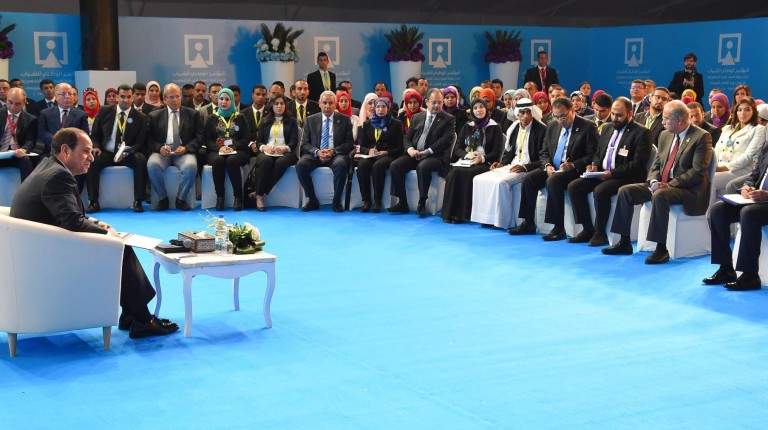 Previous governments were afraid to take the recent economic decisions we have taken in the country, President Abdel Fattah Al-Sisi said during the second day of the Third National Youth Conference on Wednesday, claiming that the economic problems in the country are an accumulation of previous issues, and the challenges are still big.

The second day began with speeches by the economic and social welfare ministers. Prime Minister Sherif Ismail, who started the session with a speech, asserted that the price hikes that occurred recently in the country are a result of the great reliance on imports that had cost the country large amounts of money, as well as a consequence of the flotation.

The first part of the second day mainly focused on developmental projects in the sectors of housing and transportation. Al-Sisi promised that they will all be finished by 30 June 2018.

During the session, ministers held presentations for several projects. Discussions over the country’s development projects were held between Al-Sisi, the ministers of transportation and housing, and the chairperson of the Suez Canal Authority. Youth joined the discussions to provide their suggestion and views.

Al-Sisi continued that the goal of undertaking sustainable development projects is to fulfil the needs of the country and help people in their daily lives, as these projects aim at offering job opportunities for people. He also said that there are other projects that were not announced and that the state only announces projects when they start.

Prior to the second day’s sessions, Al-Sisi conducted a tour of the Suez Canal tunnels that will facilitate access to the Sinai Peninsula from the rest of the country. This project will be among those that will be ready by 30 June.

The Suez Canal tunnels will be only implemented by Egyptian companies, and no foreign companies would be hired, the president affirmed during the conference.

The third part of the day included the “ask the president” initiative that was launched for citizens to ask Al-Sisi questions.

Previously, the conference’s first day began with a commemoration of Sinai Liberation Day, as attendees held a minute of silence. Al-Sisi honoured former military members from the 1973 war and from the popular resistance battles that followed.

Concerning price hikes, the president noted that the state is putting forth great effort to control the prices of food commodities, and he called on Egyptians to endure the current situation for some more time.

During the session, Al-Sisi answered question by attendees regarding significant issues in the country. The president made remarks on conditions in Sinai and the upcoming presidential elections.

When he was asked what he would do if he failed in the upcoming presidential elections, he swore that if people want him to leave, he will leave immediately.

“I swear to respect the Constitution and the law, and I’m trying to do this. I will not rig the elections under any circumstances,” Al-Sisi asserted.

Concerning Sinai, an attendee of the conference complained to Al-Sisi about media calls for the evacuation of Sinai due to terrorism threats, referring to statements made by TV presenter Ahmed Moussa. Al-Sisi said that the state is the only entity that can evaluate the situation, and mistakes made by media should not be blamed on Egypt, affirming that no one can insult Sinai residents.

“If we would have been planning to evacuate Sinai, we would have done this when terrorism was on the rise, but the problem is ending now,” he continued.

Around 1,500 youth attended the conference, along with ministers, members of parliament, and high ranking officials.

The National Youth Conference’s self-proclaimed goal is to facilitate discussions about issues and Egypt’s challenges between the youth, officials, and the Egyptian society.  The first conference was held in Sharm El-Sheikh in October, while the second took place in Aswan in January. The focus of the Sharm El-Sheikh conference was on what the state had achieved for the youth over the recent years and how it had assisted in improving their skills, while the Aswan conference focused on discussing the issues of Upper Egypt’s governorates.