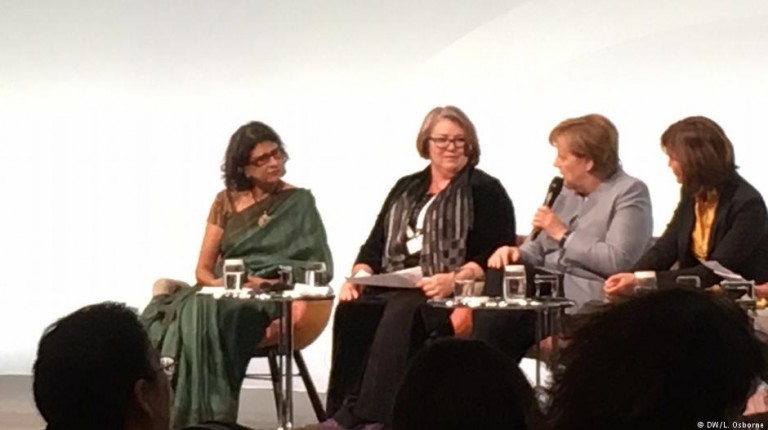 With the Ivanka Trump show having moved on, the Women20 summit in Berlin may have been quieter. But it also felt like the way had finally been cleared to talk about what really matters.One could have been forgiven Tuesday for concluding that the main issue on the agenda of the third Women20 summit was the attendance of Ivanka Trump. But little could be further from the truth.

For, prior to her arrival, during her brief, and let’s face it, awkward stint on stage and in the aftermath thereof, there have been hours on end of smart discussion and debate about the present, perceived and potential place of women in the world; about the gender divide that in too many sectors and parts of the world is more of a gape than a gap, and about the measures that must be taken to close it. For good.

During the sessions, a number of themes were raised over and again. Among them are the facts that women do not have the same access to financial support when it comes to starting their own businesses, that they are vastly outnumbered by men in positions of leadership, and that unsurprisingly they are the ones, quite literally and time and again, left holding both the baby and the elderly.

The equally unsurprising result of the family care conundrum is that women have fewer opportunities to immerse themselves in the world of work, and as a result, to secure themselves not only an income in the here and now, but a living pension in the future.

Of families and technology

Annette Niederfranke, Director of the International Labour Organization (ILO) described family reconciliation as one of the “toughest challenges for working women worldwide,” adding that in a bid to meet their obligations, women are more likely to work “in non-standard forms of employment, and in part-time work linked to lower wages, lower social security, lower benefits and fewer training possibilities.”

Connected to that particular Catch-22 is the reality that women are still massively underrepresented in the STEM (science, technology, engineering and mathematics) sectors at the heart of many talks and impassioned calls in Berlin over the past couple of days.

Leveling the employment opportunity field, and closing the digital divide, are among the recommendations of the W20 communiqué presented to German Chancellor Angela Merkel, who holds the current G20 presidency, at the end of the summit.

Prior to accepting it, she said Germany traditionally has a narrow view of professions for girls. “So it is very very important that we take a broader view of things while girls are still at school, and to consider what opportunities really exist.” And not just in Germany.

Another issue that accrued interest throughout the summit was Merkel’s proposed fund to help female entrepreneurs in developing countries set up small to medium-sized businesses. Though she stressed it could not become a reality unless she could secure the support of the other G20 states, she said that as and when it was up and running, “digital development should be an important part of it.”

Besides “digital,” one of the words echoing around the halls and rooms of the Women20 summit venue was “inspiring.” Women from all over the globe gathered in Berlin to listen to other women – and a token man – discuss how best to make this world of ours a more equal place, how to progress economic development through women, how to ensure them greater access to labor markets and financial services, and, yes, to be inspired by the steady stream of ideas and suggestions to that end.

One that came up many times was that though women can achieve a lot on their own, and even more collectively, closing the gap in anything like the foreseeable future will require a concerted effort from our male counterparts. The fact that the vast majority of those present here in Berlin were not men might, at this stage of proceedings, paint a discouraging picture.

But there was also a general consensus that the momentum reached at this, the third Women20 summit – after Turkey and China – would now be hard to stop. And momentum can be an overpowering force.

As the German Minister for Family Affairs, Manuela Schwesig, put it, the summit could give both men and women the courage to take forward the issues discussed.

“I’m sure this summit will help us progress in matters of equality,” she said. “We believe in gender equality. Change is possible.”