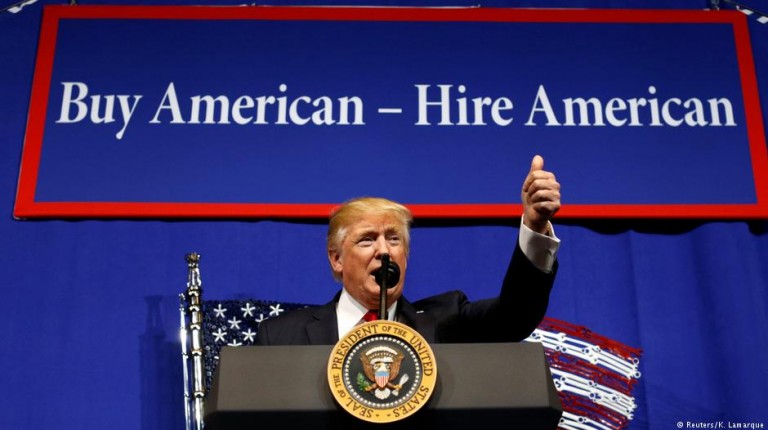 The US president wants to lower the corporate rate to 15 percent and offer multinationals steep tax breaks on repatriated overseas’ profits, likely blowing a huge hole in the budget and facing congressional hurdles.Nearly 100 days into his presidency, Donald Trump is finally ready to unveil his plan for “phenomenal” tax cuts for businesses that he dubbed as “maybe the biggest tax cut we’ve ever had.”

On Tuesday, Treasury Secretary Steve Mnuchin and National Economic Council Director Gary Cohn met with congressional leaders to iron out the finer details of the president’s broad-strokes blueprint, with the White House set to announce the plan on Wednesday afternoon.

The Trump administration will ask US lawmakers to cut the income tax rate paid by public corporations to 15 percent from 35 percent, and allowing multinationals to bring home overseas profits at a tax rate of 10 percent compared with 35 percent now, according to media reports citing White House sources.

It also includes a proposal to cut the top tax rate on “pass-through” businesses from 39.6 percent to 15 percent. Pass-through entities don’t pay the corporate rate. Instead, their profits are distributed directly to their owners, who then pay taxes on them as normal income. This applies to mainly small businesses but also to hedge funds, private equity firms, and real estate developers such as the president himself.

Trump’s proposal reportedly won’t include a controversial “border-adjustment” tax on imports that was in earlier proposals floated by Republicans in the House of Representatives as a way to offset revenue losses resulting from tax cuts.

During a meeting in the Oval Office last week, the US president reportedly told staff that he wanted “a massive tax cut to sell to the American public,” with concerns about how to finance the budget shortfall arising from them being “less important” to him.

Trump’s “principles on tax reform” reportedly don’t include any proposals for raising new revenue to offset that lost by the tax cuts.

According to estimates by the Tax Foundation – the leading US non-profit organisation on taxes – cutting the corporate tax rate alone could reduce federal revenue by about $2.2 trillion over the next decade.

That’s about $240 billion a year, which is almost as much as the $304 billion the government spent last year on income security programs such as food stamps, unemployment benefits and child nutrition. The cost could jump to nearly $4 trillion if the cuts for pass-through businesses are included.

However, Treasury Secretary Steve Mnuchin has repeatedly pledged that the administration’s tax plan will pay for itself. He has emphasized that the proposal will generate economic growth, which he argues should in turn lead to higher tax revenue from rising wages, higher employment and strong business sales.

“You could have as high as a $2 trillion difference in revenues depending on what you think is going to be the growth function,” Mnuchin said at a speech in Washington last week, adding that the plan “will pay for itself with growth.”

Tax Foundation estimated that this would need to see a sustained 0.9 percentage point increase in the US growth rate over 10 years, which the think tank doesn’t see as realistic.

The Trump has been eager to craft a tax package that can win support in Congress, but they are likely to also trigger formidable procedural problems in the Senate.

To get its tax changes through without relying on Democratic party support, Republicans will have to use a process called reconciliation. One element of this is the requirement that the tax reform does not add to the deficit beyond a 10-year window, implying the tax rate cut would have to be only temporary and assuming it is not offset by other revenue-raising measures.

Moreover, the White House plan could clash in some ways with a broader tax plan shaped months ago by House Republicans, and complicating the consensus-building within the GOP.

The House Republican plan proposed a 20 percent corporate tax rate, including “pay-fors” coming from a “border adjustment” tax that would favor exports and discourage imports.

The plan was declined by Donald Trump. Moreover, the tax reform process is already bogged down following the legislative chaos surrounding attempts to repeal and replace Obamacare last month.