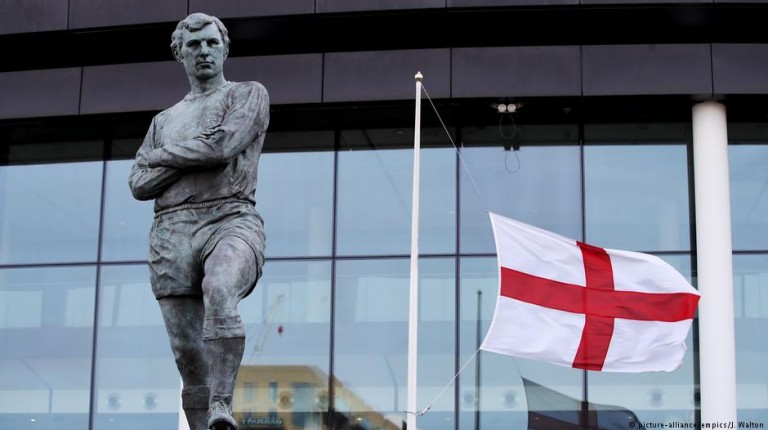 Donate a small sum to a bowel cancer charity, then wear your favorite team’s jersey to the office with pride. This novel fundraising initiative in Britain attracted celebrities, players, and even some Bundesliga fans.Football fans around Britain could sport their team’s colors on Friday in exchange for a 2-pound (2.37-euro, $2.59) donation to the Bobby Moore Fund, a bowel cancer research charity in honor of England’s World Cup-winning 1966 captain.

“As a football supporter, the allegiance with and belief you have in your own team is unwavering. We need to take that spirit and apply it to beating bowel cancer sooner. We will make progress and we will win,” the Bobby Moore Fund said of the event.

Bobby Moore was already associated with cancer by the time he won the 1966 World Cup. He survived testicular cancer in 1964 in his twenties and later returned to the pitch. In the 1990s he contracted bowel and liver cancer that ultimately could not be treated, and died aged 51 in 1993. His widow, Stephanie Moore set up the Bobby Moore Fund after his death.

“We want to see the whole nation get behind Football Shirt Friday, wearing their team’s colors and believing that together we can will beat bowel cancer,” she said. “We have made enormous progress in the last 50 years but sadly bowel cancer still kills 44 people in the UK every day.”

The mechanics are simple, fans could simply send the SMS “GOAL002” to a UK number – at the cost of a normal text message plus a 2-pound fee.

Celebrities in Britain got on board in support, including daytime TV brainbox Rachel Riley, sporting an impressive vintage of Manchester United shirt dating back to the 1986 season, the year when Scottish manager Alex Ferguson took over from Ron Atkinson – Genesis for Manchester United’s modern-era success.

Even the Bundesliga was represented, at least for kids in one lucky classroom with a Schalke supporter at the white board.

Cancer and cancer research also made the headlines in the UK for other reasons on Friday, with the release of a report criticizing the specialist Cancer Drugs Fund (CDF), a special fund designed to provide costly and experimental treatments not currently available on Britain’s NHS health service. Specialists argued that the 1.2-billion-pound fund had only modest success in prolonging people’s lives while sometimes delivering major side effects or quality of life setbacks. The fund has since been stopped and relaunched with revisions.

According to Britain’s NHS, cancer is the country’s most common cause of premature death, responsible for 42 percent of such cases.

In Germany, roughly half a million new cancer patients are diagnosed each year. Survival rates and treatment quality are improving, but the number of cases is also rising given Germany’s aging population. After heart disease, cancer is Germany’s second most common cause of death.

HEALTH MATTERS: Can an Aspirin a day keep the doctor away?