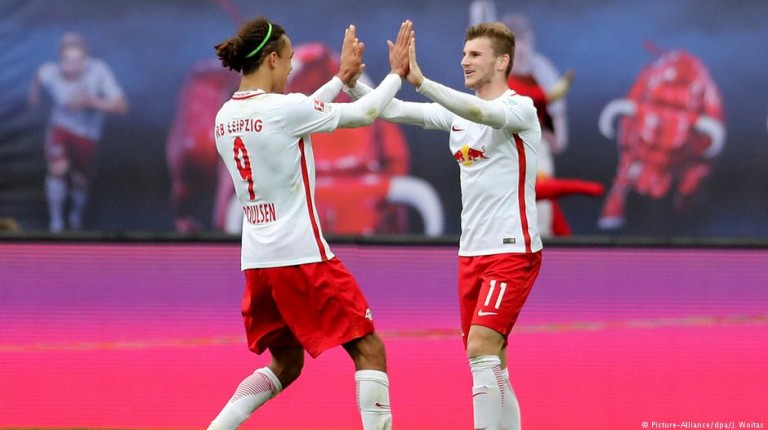 Can Leipzig make Bayern work for their fifth title in a row? Can Dortmund break the habit that’s cost them already this season? And will the league’s form horse hold on in the home straight? Here’s what to watch out for.Leipzig looking to keep it alive

The Bundesliga title has seemed out of the Red Bulls’ reach since they lost in Munich just before the winter break but with four games to go, they are just about still alive. Last weekend they failed to capitalize on Bayern’s Saturday slip up in Mainz, drawing with Schalke on Sunday after the opportunity to cut the gap to six points presented itself.

Leipzig host lowly Ingolstadt on Saturday before Bayern travel to Wolfsburg in the late game. With Bayern’s patchy form (no wins in five), a victory for RB might just turn up the heat ever so slightly on a Bayern side that have shown they’re capable of collapse once this week already. To lose the title would be a different level of capitulation but Leipzig must at least make them work for it – if they fail to win, three points for Bayern will make it five titles in a row.

If Leipzig were the story of the first half of the season, Bremen have been the team of the second half. The Green-Whites are top of the Bundesliga form table and haven’t lost a game since February 11. Their run of eight wins and two draws in the last 10 has propelled them from the relegation playoff spot on matchday 20 up to 7th, a spot likely to be good enough to make the Europa League.

Bremen host Hertha Berlin on Saturday. The capital club sit two places and four points above the northerners and with games against Dortmund and Hoffenheim to close out the season, this is Bremen’s biggest opportunity to ensure they are in the European shake-up come May 20.

Their scintillating comeback win over Bayern in the German Cup rescued their season and will undoubtedly have boosted a side who’ve had a tough time of late. But, as Sokratis Papastathopoulos said after Wednesday’s win, BVB can’t afford to let their focus slip in the way they have before this term. After hammering Benfica 4-0, they lost to Hertha; after beating Leipzig, they lost to Darmstadt; after beating Bayern in November they lost their next league match to Frankfurt.

They host Cologne on Saturday before Hoffenheim’s visit next weekend. Any points dropped before that one may well put Julian Nagelsmann’s side in the box seat for automatic Champions League qualification.

The battle for breathing space

It may not be the neutral’s choice but probably the biggest game of the weekend is at the Augsburg Arena where Manuel Baum’s men host Hamburg. Augsburg sit in the relegation playoff spot just a point behind their opponents, making a head-to-head absolutely critical. And tense.

Hamburg have recovered, to some extent at least, from a disastrous start to the season that saw them fail to pick up a win until December. A decent spell in the new year saw them start to pull away from trouble before a shock loss to doomed Darmstadt last week put them right back in the mire. Augsburg don’t have the resources of HSV but have long been punching above their weight in the top flight. But with fixtures against Borussia Mönchengladbach, Dortmund and Hoffenheim to come, it looks increasingly like win or bust for the Bavarians.

The Bundesliga home straight: Who needs what in the run in