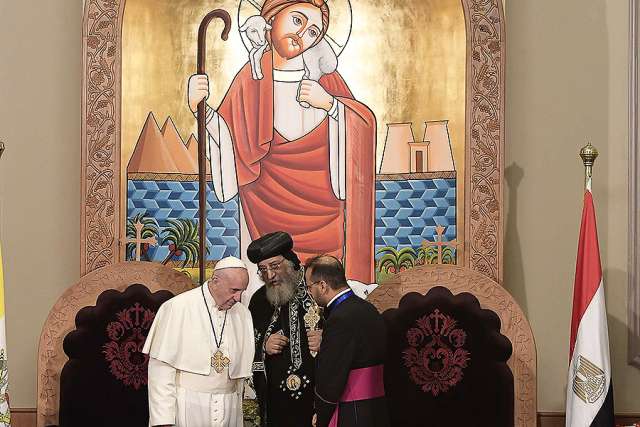 In an official speech on Friday, Pope Francis, the head of the Roman Catholic Church, praised diplomatic relations between Egypt and the Vatican, adding that he would like to greet all Egyptian citizens and Christian brothers living here in this country.

Pope Francis arrived in Cairo on Friday and started his visit by meeting with President Abdel Fattah Al-Sisi at the Ittihadiya Palace, and he also met religious officials.

In his speech, he thanked Al-Sisi for his invitation and the good welcome, pointing out Al-Sisi’s visit to Rome in November 2014; his meeting in 2013 with Pope Tawadros II, the head of the Coptic Orthodox Church; and his 2016 meeting with the Grand Imam of Al-Azhar, Sheikh Ahmed Al-Tayeb.

He expressed his happiness for visiting Egypt, which he described as “the land of noble civilizations; the land that represents much to humanity, to the church’s traditions, and to history—not only because of its ancient history, whether Pharoanic, Coptic, or Islamic, but also because several bishops lived in Egypt or passed by it.”

“In fact, Egypt was mentioned several times in the Holy Books. In this land [Egypt], God allowed Moses to hear his [God’s] voice and where the Holy Family was hosted,” the pope added.

“You are not new in Egypt; you are an original part of this country,” the pope said, addressing Copts.

“We all feel that Egypt is our land. As you say, ‘Egypt is the mother of the world.’ Until now, it welcomes millions of refugees from Sudan, Eritrea, Syria, and Iraq, trying to incorporate them into the Egyptian community,” he added.

Commenting on extremism, he said that “due to its history and the unique geographic location, Egypt plays an indispensable role in the Middle East. The blind and inhumane violence is there because of the desire for power, arms trade, dangerous social problems, and religious extremism that uses the name of God to commit heinous massacres and crimes.”

He added that “Egypt’s duty is to strengthen and boost peace in the region despite being wounded as a result of the blind violence.”

The pope expressed his concern about those “who lost their lives to protect their homeland, youth, military and security personnel, Coptic citizens, and others who were victims to different terrorist crimes and killing operations that caused the evacuation of Christians from North Sinai. He expressed his greetings to religious and civil authorities and those who hosted or helped the victims in their suffering as well.

He also offered his condolences to the families of those who lost their lives in the last two blasts in Alexandria and Tanta.

He praised the efforts done by the Egyptian state to achieve national projects “and initiatives in favour of peace in and outside the country in order to achieve development and the needs of the people.”

“Development and peace are goods that can’t be forgone and deserve being sacrificed for. They require hard work, commitment, suitable methods, and, before everything, unconditional respect for human rights, which is not negotiable, such as the right of equality between all citizens, the right of practising religion, and the right of speech without discrimination,” the pope said.

“These goals require special care of the youth and the poor, as well as women’s roles. In fact, the glory of any nation appears in how far it cares about underprivileged classes: women, kids, elders, patients, disabled, and minorities,” he added.

He asserted there is no way to build a civilisation without denying an evil ideology, and the extremist understanding aims to remove those different from themselves.

The pope called for teaching the new generation that “God, the creator of heavens and earth, doesn’t need our protection, but He protects us, and He wants us happy—not dead—and the real God calls for unconditional love, mercy, free forgiveness, absolute respect for any life, and brotherhood between all his sons, believers and nonbelievers.”

“Egypt, which salvaged other nations from the famine in the era of Prophet Joseph, is today called to save this beloved region from a famine of love and fraternity,” he said, citing an Egyptian nationalist slogan used during the 23 July Revolution: “religion belongs to God and the nation to all.”