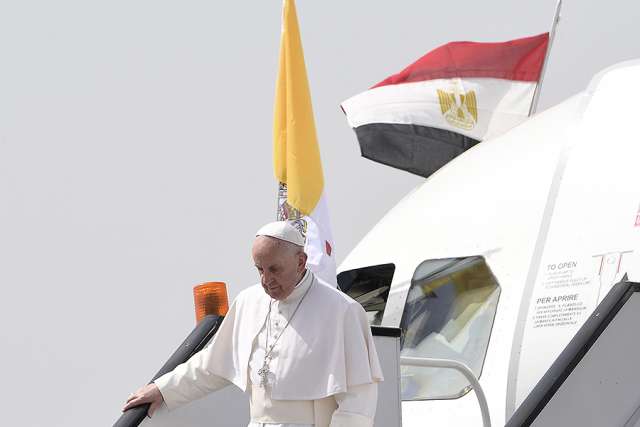 Security forces have intensified their presence, with a reported 30,000 security personnel during Pope Francis’ visit to Cairo on Friday and Saturday, in areas where the Pope was destined to visit, as well as other lively neighbourhoods around Cairo and Giza.

On the second day of his visit, the Pope led prayers in the Air Defence Stadium, which was guarded by security forces and helicopters, although distant from crowded areas in Cairo.

Earlier during the Pope’s visit, he met with Pope Tawadros II in Saint Mark’s Coptic Cathedral, which was bombed last December.

“Most events were attended by masses, such as the prayer, which had more than 25,000 attendees. However, the security forces of the Ministry of Interior, as well as the military forces, managed to maintain stability,” he added.

Prior to the visit, Pope Francis had reportedly refused to stay in presidential palaces during his two-day visit to Cairo, as he also refused to commute in armoured vehicles, according to local Egyptian newspapers, despite criticism of Egypt’s security situation.

Pope Francis had directed a message to Egyptians in a video ahead of his visit, saying that the “world is torn by blind violence, a violence that has also struck the heart of your beloved land. Our world needs peace, love, and mercy,” and has insisted on visiting Egypt despite the terror attacks.

The visit comes after the two blasts at the Tanta and Alexandria churches during Palm Sunday celebrations earlier this month, which left around 46 people killed and dozens injured.