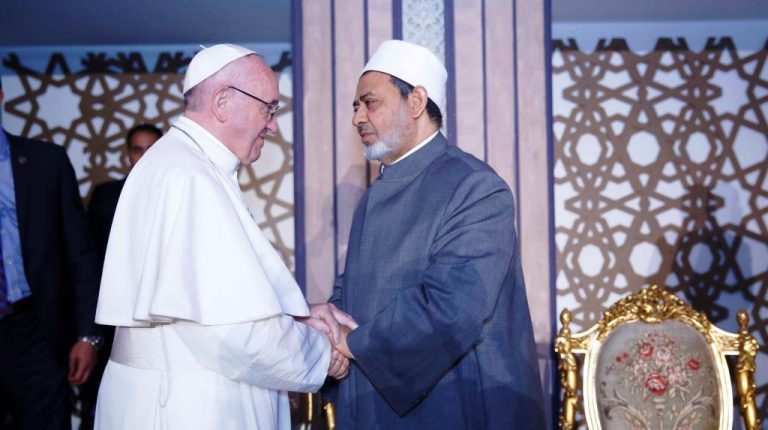 The Grand Imam of Al-Azhar, Sheikh Ahmed Al-Tayeb, received Pope Francis, the head of the Roman Catholic Church, at Al-Azhar headquarters on Friday after the pope participated in Al-Azhar’s International Conference for Peace.

In his speech, the Grand Imam welcomed Pope Francis and thanked him for accepting Al-Azhar’s invitation to attend the conference.

“There is no acceptable reason for the existence of all crises that the world is facing but arms trade and its marketing,” Al-Tayeb said, adding that that such business will guarantee the survival of arms factories as well as continue to enrich individuals through reckless arms deals.

He continued to wonder how such business could be taking place in the 21st century, which he described as the “the century of technological progress, peace institutions, and security councils,” and of humanistic philosophy and social ideologies.

“The central question is: how has international peace become the lost paradise? The answer is modern civilisation’s ignorance to the Abrahamic religions and their values, such as brotherhood and recognition,” he said.

Al-Tayeb believes that the solution is to raise awareness of religions and that the land is now ready for religions to take its role in promoting the value of peace, justice, equality, and respecting the human, regardless of religion, race, colour, and language. “And before this, we have to clarify the image of religions, of misunderstandings, and of wrong beliefs, and not accuse religions of crimes of some frivolous believers in any religion,” he added.

“Islam is not a religion of terrorism because of the misconceptions of some of its believers who commit murder and crimes, and found people who provided them with money, training, and arms,” the Grand Imam said.

The Grand Imam appreciated the pope’s statements that defended Islam and Muslims and denied accusations of terrorism, expressing Al-Azhar’s desire to cooperate in deepening “the philosophy of common life, dialogue, and respecting different beliefs.”

The meeting between the Grand Imam and Pope Francis is very important in this time, because of the challenges the world currently faces, Ammar Ali Hassan, sociologist and writer, told Daily News Egypt. “It is not only important for Islamic-Christian relations, but also for the Christian-Christian relations, and it was good that both the pope and the Grand Imam denounced arms trade,” Hassan added. The meeting says that the dialogue between religions is an alternative to religious violence, the Secretary of the Islamic Council for Research, Mohie El-Din Afifi, told Italian media.

According to Afifi, the meeting can be considered as a real renewal of religious rhetoric.