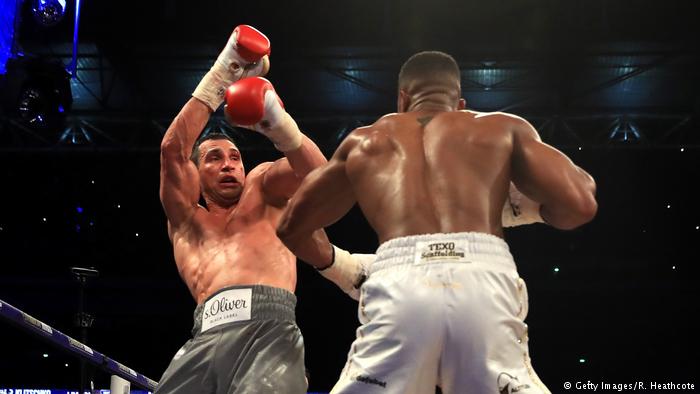 Anthony Joshua has knocked down ex-champ Wladimir Klitschko in the 11th round to retain his heavyweight crown in front of 90,000 at Wembley in London. It was Britain’s largest attendance for a boxing event since 1939.The 41-year-old Ukrainian Wladimir Klitschko was down on the canvas in round five before sending Britain’s Anthony Joshua to the mat for the first time in his career in round six.

Joshua, 27, fought back and dropped Klitschko twice with an uppercut and left hook combination before a flurry of punches in the corner gave the referee no choice but to stop the fight in the penultimate round and declare Joshua the undefeated WBA and IBF heavyweight world champion.

“What can I say? 19-0, three and a half years in the game. As I said, I’m not perfect but I’m trying and if you don’t take part you’re going to fail,” said Joshua. “As boxing states, you leave your ego at the door and you respect your opponent. So a massive shout out to Wladimir Klitschko.”

US legend Sugar Ray Leonard called the fight “amazing” and said the opponents showed a “lot of heart.”

The fight matched two Olympic gold medalists (Klitschko 1996, Joshua 2012) who both stand 6-foot-6 and have impressive knockout records. Klitschko, who lost his title in his last fight, was trying to become a three-time champion at the age of 41 against Joshua, who had until tonight fought only 18 times but had 18 knockouts.

Joshua, 27, confronted Klitschko in the biggest fight the division has seen in years. It was the most significant heavyweight fight ever held in Britain and reportedly earns the pair upwards of 10 million pounds ($13 million, 12 million euros) each.

Joshua – the London 2012 Olympic gold medallist who was born in England to Nigeria-born parents – had never been beyond seven rounds, Klitschko has fought 12 rounds nine times.

The Ukrainian was last seen in a ring in November 2015 when he was outboxed in a defeat by Joshua’s burly compatriot Tyson Fury, ending his nine-and-a-half-year reign as champion.

Joshua had tipped the scales at 17 stone, 12 pounds 2 ounces (113.4 kilograms) -10 pounds more than Klitschko and his heaviest ever pre-fight weight – at Friday’s weigh-in.