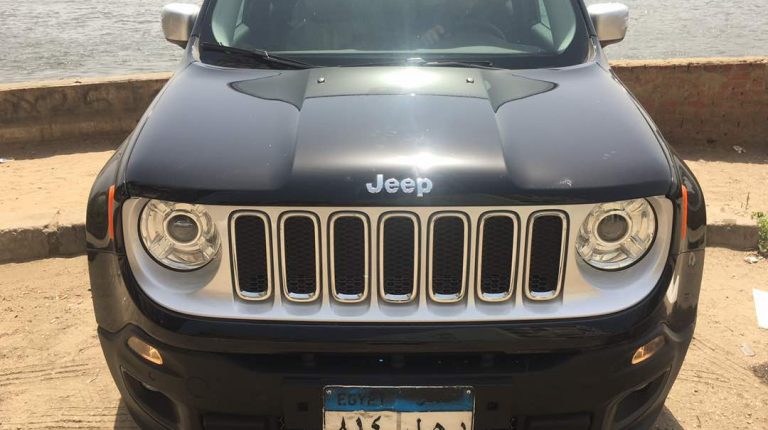 We had the car for four days to test it on overland roads, as well as testing its suitability for the city’s roads.

Daily News Egypt was keen on trying the car as one of the most recent cars added to the Jeep family, carrying the features distinct to Jeep since it launched in 1941.

Renegade is a new small cross-over, with a sporty touch and attractive Italian design. The exterior of the car combines the seriousness of Jeep with the new sporty touches. The front of the car holds a luxurious strong look, suitable for young people with the front circular lights and attractive fog lights within a black square frame.

The car mixes strength with luxury. It has the ability to take long trips, offering its driver a group of accessories that make it a car to rely on for all trips and on all roads.

In its four-wheel version, Renegade has a variable-speed small engine with the MultiAir technology, with a 1,400cc capacity distributed through four cylinders. The engine is 170 horsepower at 5,500 revolutions per minute (rpm), with 250 Newton metres for maximum torque, which appears at 2,500 rpm.

The engine is connected to a new FCA automatic gearbox with nine front speeds. It also can switch the engine to the four-wheel system.

This engine can provide the car with a fairly good performance, whether on paved roads, unpaved roads, or deserts. The four-wheel Renegade can accelerate from 0 to 100 km/h within 8.8 seconds, with the ability to reach a maximum speed of 200 km/h.

Average fuel consumption of the engine is 6.9 litres for every 100km. The capacity of the fuel tank is 48 litres.

The interior of the Renegade offers comfort to passengers. The exterior design has helped make this possible in the interior. There are leather seats, with a front panel that has more than one button to allow the driver to control most of the car’s capabilities electronically. The tableau has its own kind of sophistication, with the ability to control the steering wheel to receive or reject calls and control the audio system, in addition to the use of USB, SD Card, or Bluetooth and the remote-control option through talking.

The interior of the car also contains a 7-inch screen with all the control options of the car, including a rear camera, a system to identify the dimension of the car for parking, as well as several entertainment options, GPS, and a road map.

The car also has a panoramic sunroof with the option to close or open the sunshade or the entire sunroof.

The rear of the car

The rear of the car combines the American design with Italian performance, with durability and shockproof features, and the ability to deal with rocky roads.

The rear has the glass area, with lighting in the trunk, which accommodates more than four large bags.

The rear of the Jeep Renegade is attractive, especially with the four large square lights, giving the shape of an X inside and an aesthetic touch.

The two sides have a smooth design, with a height off the ground, medium-sized tires, and 18-inch sporty rims.

Stability on the road

The Renegade has showed its efficiency on the road, especially with turns. Stability was very good, and the engine’s sound was very low compared to other cars in the same class, proving the distinct performance of the engine.

Vibrations in the car were noticeable when the car neared the speed of 160km/h.

Renegade provides safety for its passengers with the airbags in the driver and front passenger seats, an ABS brake system, electronic distribution of EBD brakes, and security features to prevent road and parking accidents.

Renegade has a smart system to facilitate the parking process for the driver, especially in crowded and narrow areas. It also has a CD player, AUX input, electric front and back windows controlled with only one touch, and a smooth leather steering wheel.

The Renegade allows remote control for opening and closing the doors and operating the vehicle, as well as controlling the positions of the seats. It also has light-sensitive head lights and foldable side mirrors.

The overall general impression of the Jeep Renegade is positive. It is an SUV suitable for the nature of Egyptian streets. The height of 8.9 inches off the ground makes the car the strongest amongst its rivals in terms of dealing with Egyptian roads.

The Jeep Renegade is available in four different categories in the Egyptian market, with three front-wheel versions—“Longitude”, “Limited 1” and “Limited 2”—in addition to the highest four-wheel category “Limited 4×4”.

All Renegade models are equipped with the standard options, including an interior LED lighting system, USB and AUX inputs for electronic devices, dual-zone air conditioning system, multi-purpose steering wheel, keyless entry and operation of the vehicle, surveillance system of the tires’ pressure, and fog lamps.

The Longitude has 16-inch metal wheels, while the Limited 1 and Limited 2 have 17-inch wheels. The Limited 4×4 is equipped with 18–inch wheels.

As for the sound system, the standard sound system is connected to six speakers in the two first models of the Renegade, while the Limited 2 and Limited 4×4 are equipped with the luxurious BEATS system. All Renegade units come with a U-Connect unit for communications and the radio.

As for the electric sunroof and mirrors, they are only limited to the Limited 2 and Limited 4×4 models.

Electric seats that can be controlled in eight different positions are available in all models except the Longitude.

Aveo retakes the lead from Lanos