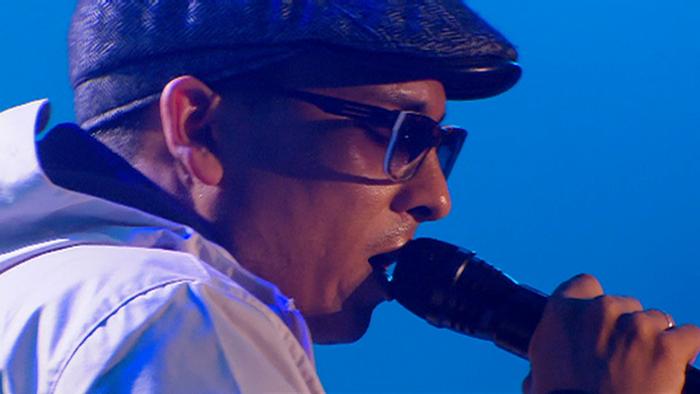 German soul singer Xavier Naidoo and his band Söhne Mannheims have released an album that has created a stir nationwide. At issue are lyrics that appear to cater to the far-right.The song “Marionette” by Xavier Naidoo and his band Söhne Mannheims is peppered with more or less veiled agressive references to high treason, the “lying press” (Lügenpresse) and other ideologies close to the right-wing populist Reich Citizens’ Movement.

The text threatens lawmakers, saying “angry farmers with their pitch forks will make sure you see the light,” and resorts to language widely used by the far-right, including terms like “marionette” and “puppet player.”

While right-wing groups and their followers cheer the song, it has definitely raised eyebrows elsewhere – including the band’s native city of Mannheim.

Mannheim’s Mayor Peter Kurz, whose administration has for years cooperated closely with the band on local culture projects, has asked the pop group to meet with him to resolve the issues surrounding a song that another German singer, Henning Wehland, has described as nothing but “an appeal to think.”

Accusations of populism and catering to the rightwing: It is not the first time that critics have honed in on Xavier Naidoo and his lyrics and interviews.

The 45-year-old may have sold millions of albums since 1998, received countless music awards, and appeared at every major festival – but opinions over his texts differ.

Born the son of a mother from South Africa and a father of Indian ancestry in 1971, Naidoo sang in school and church choirs as a child. At the age of 20, he traveled to the US, learned the music business, and returned to Germany.

His 1998 album “Nicht von dieser Welt” (Not of This World) was No. 1 in the German album charts and remained in the Top 100 for nearly two years. Naidoo’s 2006 song “Dieser Weg” (This Way), written for the German national soccer team, was the soundtrack to that year’s World Cup.

In 2015, Naidoo was chosen to represent Germany at the Eurovision Song Contest in Stockholm. The nomination was withdrawnin the wake of a storm of protests from the public and a social media backlash from people pointing out the singer’s links with right-wing groups.

The previous year, Naidoo had spoken at a gathering of the right-wing populist Reich Citizens’ Movement, which does not accept Germany as a sovereign state. These and other right-wing associations celebrate the soul singer – who is critical of the US, is known to pick up on conspiracy theories, and has likened Germany to an “occupied country” – and use him for their propaganda.

“I understand the outcry, but the song is not a call for violence, it’s an appeal for a dialogue,” says band member Rolf Stahlhofen.

Naidoo has yet to comment on the controversy over “Marionette.”

Russia ratchets up war rhetoric – and not just in Syria