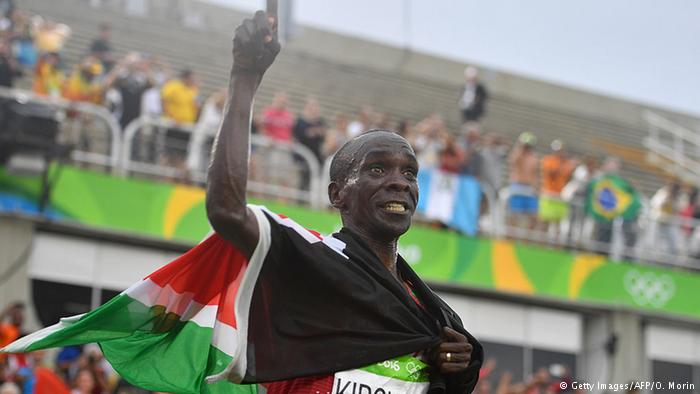 It’s been dismissed by some as a marketing stunt for a sportswear company while others think breaking the two hour mark for a marathon is worthwhile whatever the circumstances. But what does Breaking2 actually mean?A sub two hour marathon is considered to be one of the last great barriers of athletics. But even if one of the three African athletes running in the Breaking2 event in Italy on Saturday achieves the feat, they won’t be re-writing the record books.

Kenyan Dennis Kimetto set the current record of two hours, two minutes, 57 seconds in Berlin in 2014, which is about four minutes faster than it was in 1988. Kimetto’s time works out to 4:41.5 minutes per mile; a sub-two would require less than 4:35 per mile – an improvement of about seven seconds per mile, or around 2.5 percent.

The American sportswear giant believes a series of so-called ‘marginal gains’ can help the specially selected runners break the 120 minute barrier but despite fulfilling some IAAF requirements, including anti-doping rules, any time will not officially count for anything, leading many in the sport to question the value of the event. Nike insists the marginal gains are worth exploring, here are some of the factors they believe can make a difference.

Unsurpirsingly, given the company behind the ‘race’, footwear is at the heart of the issue. Nike’s 200 gramme Zoom Vaporfly Elite features a new foam and curved carbon insert, which helps change the angle of the foot and supposedly means runners require four percent less energy to go at the same speed, in comparison with their previous best shoe. Each runner’s shoes have been custom-fitted.

Nike will also kit out the trio in new socks, shorts and singlet, all of which it claims will offer an advantage in terms of aerodynamics and/or ventilation and support.

Perhaps the most controversial of the gains, and the one that has turned people off the event and contributed to its official illegitimacy is ‘drop in’ pacemakers. The three runners will be sheltered throughout the attempt by a group of pacemakers, who will dip in and out at various times to ensure they maintain the demanded pace.

Pacemakers are nothing new in long distance running, with the only true difference being that that, in normal competition, they have to start the race together.

The delay normally caused by taking on fluids should be eliminated after Nike trialled a new system on the Monza course in March. Athletes took core-temperature pills and used taped-on muscle oxygen and skin-temperature sensors.

They were also served drinks ‘on the move’ via a moped, avoiding the need to slow and lose rhythm at traditional drinks stations – another innovation the IAAF have concerns about.

The athletes will run around a 1.5 mile (2.4km) loop, that forms part of the Italian Grand Prix course, 17.5 times. Monza was picked by Nike due to a combination of environmental factors, including average temperature, air pressure and wind levels. The surface, with no kerbs or cambers, was also considered optimal.